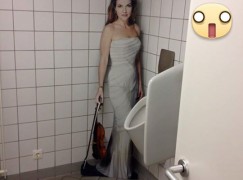 The Stage, which covers all theattrical activity in the UK, has taken down its reports on the new facilities at the Old Vic Theatre, where archaic divisions of men and women were to have been abolished.

Here’s what the paper now says: 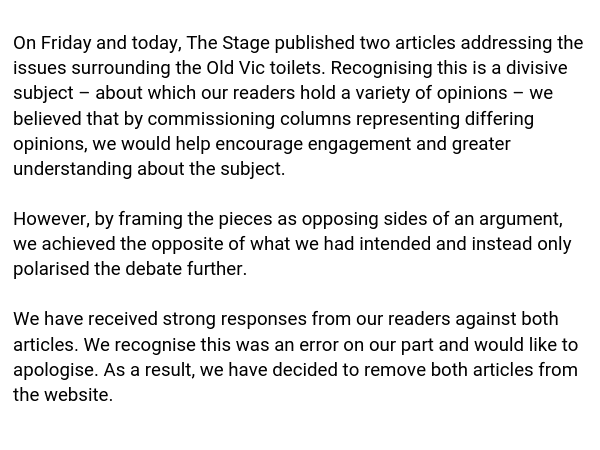 UPDATE: Sarah Ditum has republished one of the offending articles here.

This article appeared briefly on the Stage before reactions to it convinced them to unpublish both this, and the article it was responding to. The features editor originally approached me, and as well as writing the column I made myself available for any edits (which were not required), despite the £50 fee being well below my usual rate – I consider the issue of women’s access to public toilets important enough to take a hit on the fee. Unfortunately, the Stage did not consider it important enough to support the work it commissioned, nor did they consider it necessary to notify me before unpublishing. You can read it here and decide for yourself whether it is an obnoxious enough piece of writing to deserve that treatment. …

For men and women to have equal wait times for toilets, a good rule of thumb is that women should have access to twice as many toilets as men. But few public toilets put that principle into practice, and the disparity is rarely more infuriating for women than when trapped in the queue at the theatre with the bell summoning you to your seat. So when the Old Vic launched a fundraiser to double provision for women, a lot of female theatregoers were very keen to give it their support.

But now the Old Vic has completed the refurbishment, it’s clear that something has gone very wrong. Yes, there are more toilets, with 44 where there were once 22 – but not more toilets for women. Instead, there are 26 toilets and 18 urinals, and all toilets have been turned “gender neutral”…. 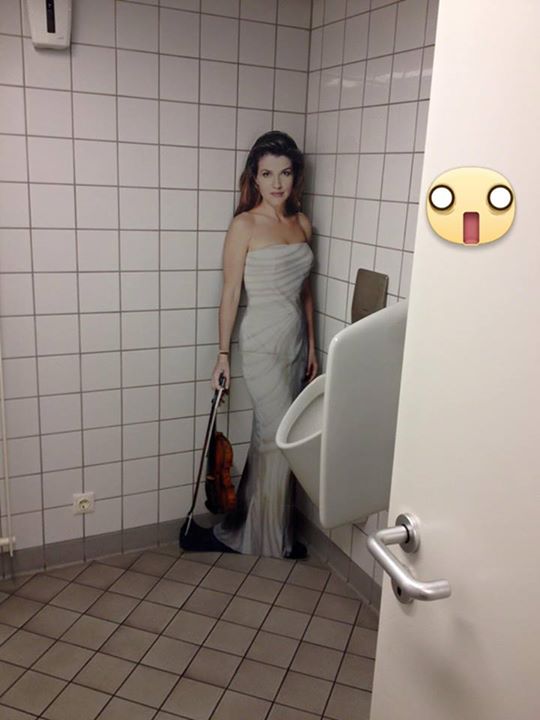 « Just in: New York radio station is killed off