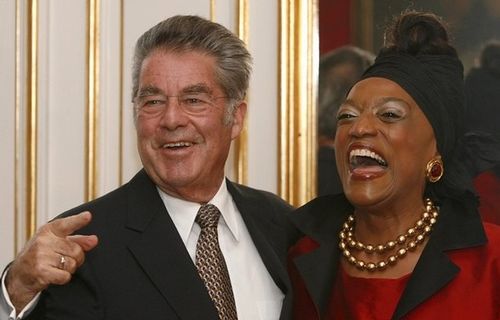 ‘Jessye Norman demanded so much of herself’

On the weekend of her funeral, record producer Martha de Francisco reminisces on a studio life with Jessye:

My first encounter with Jessye Norman was at the Musikverein Hall in Vienna in 1983, as we prepared to record Mahler’s Resurrection Symphony with Lorin Maazel and the Vienna Philharmonic Orchestra with the Vienna State Opera Chorus for CBS Masterworks. From the onset of her voice singing “O Röschen rot” in “Urlicht” the musical impact of that magical voice and the depth of her performance made a lasting impression on me as a young musician and recording professional. It marked the beginning of my life-long appreciation of Jessye Norman’s amazing artistry and it established the basis for a fruitful collaboration on her unforgettable recordings.

Her rendition of La Marseillaise in the Berlioz setting with L’Ochestre de Paris and the Chœur de l’Orchestre de Paris under Semyon Bychkov for the 200th anniversary of the Storming of the Bastille in 1989 marked a milestone in my early career as a Philips producer. I produced the recording at Salle Pleyel in Paris. Images of Jessye Norman wrapped in the tricolore during the bicentenary celebrations, singing the most palpable embodiment of French music in the spirit of liberté, égalité, fraternité are etched in my memory.

The recording of Richard Strauss’ Ariadne auf Naxos, in a line-up of the greatest vocal stars such as Edita Gruberova, Dietrich Fischer-Dieskau and Julia Varady with Kurt Masur and the Gewandhaus Orchestra, offered me the opportunity to admire Jessye Norman’s immense musicality and the power of her voice from the close-up perspective of a record producer. We recorded the opera for Philips at the Neues Gewandhaus in Leipzig in 1988. Jessye’s Ariadne was magnificent, majestic and profoundly human. During a longer break between our recording sessions, I was an accomplice as Jessye escaped to visit Johann Sebastian Bach’s Saint Thomas Church where we listened to a concert of cantatas sang by the Thomaner boys’ choir. Sitting with Jessye Norman right next to Johann Sebastian Bach’s grave, feeling her emotion and mine as we listened to this music together while being aware of the composer’s physical presence in front of us, was a unique experience that I keep deeply in my heart.

Of personal and spiritual importance in Jessye Norman’s recording career are two productions I was entrusted with as recording producer for Philips. One was In the Spirit, a Christmas concert that we recorded in various churches around New York in 1996 for which Jessye put together a musical program and invited community choirs to accompany her on a spiritual adventure through music.

December 1990 saw the release of the recording and filming of Jessye Norman at Notre Dame, a major musical event that took place during a freezing Parisian winter. The Cathedral was at capacity and the Christmas concert was conveyed to a crowd gathered on the square of Notre Dame who followed the concert live over a large screen and huge loudspeakers. Few of those who later listened to the CD or saw the film on television around the world, were aware of the complexities that followed, as changes had to be introduced to the recording schedule. Jessye was at the center of making it all work, and I remember her involved in a phone conference with Jacques Lang, minister of culture, capably leading the negotiations in her impeccable French, which led us to getting the Cathedral to remain closed for an extra morning of recordings the day after the concert. I admired not only Jessye’s musical prowess, but also, her ability to make impossible things happen.

She demanded much of herself and it was just fair that she would demand equal professionalism from those around her. It was a wonderful privilege to see Jessye in collaboration with her musical partners, celebrated conductors and pianists, her fellow singers, Opera companies, orchestras, symphonic or lay people’s choirs, children’s choirs, record label representatives and recording teams. She enjoyed the greatest degree of esteem and veneration.

A particular highlight was for me to witness the close artistic partnership between two musical titans, Jessye Norman and James Levine, which I experienced firsthand in our recording of their Salzburg recital in 1991, as well as while recording Schönberg’s Erwartung with the New York Philharmonic in 1993. These are unforgettable experiences.

I feel fortunate to have witnessed Jessye’s human depth as we were struck by the passing of a common friend after illness. I greatly admired the faithful friend Jessye Norman, a world star, who would travel to Amsterdam to spend time with our dying friend, his family and friends, grieving together, offering all of us her warmth and consolation.

Among the happier memories in the course of the years are evenings at her home optimizing the mixes of our latest recording, which ended in the kitchen, cooking a simple pasta dish together and telling witty stories, before returning to our listening.

My final encounter with Jessye was during her last visit to Bogotá in 2010 where we reminisced on our common memories around her Philips recordings, music and friendship. That final recital, which I witnessed accompanied by my family in Colombia, is still resonating in my inner ear.

Farewell, dear friend. I find solace in recognizing your spirit immersed in profound discourse with the composers in the recordings you left us, your great gift to the world.

Martha de Francisco was one of Jessye Norman’s recording producers for Philips (1986-2000).

« Tokyo cancels opera ‘due to typhoon’

We began playing the Shostakovich quartets in 1969 »