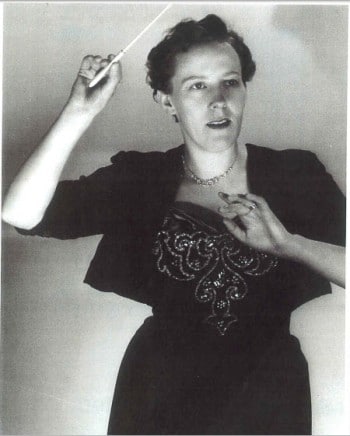 The third concert in the City of Birmingham Symphony Orchestra’s centennial season was another show of British shock and awe. Review by the conductor and Conservatoire teacher Christopher Morley:

If the CBSO’s programme continues to be as adventurous as tonight’s during its two-year-long centenary celebrations which have just begun, then we’re in for a fascinating journey.

Three British rarities kicked off with the Second Symphony of the 25-year-old Ruth Gipps (premiered), premiered by George Weldon and the then City of Birmingham Orchestra 73 years ago. A protegee of Weldon’s, Gipps had been the CBO’s second oboe and principal cor anglais until gossip about their relationship forced her resignation.

The symphony is strongly scored and structured, often redolent of Vaughan Williams (Gipps’ teacher), and vibrant with personality. It is in fact a “War Symphony”, conflict disturbing a pastoral idyll, and with a stamina-sapping snare-drum part which evokes Shostakovich’s recent Leningrad Symphony. Often this 20-minute work has the evocative power of film-music, and Mirga Grazinyte-Tyla and the CBSO rendered it with a controlled mixture of control and delicacy.

Also visually stimulating (inspired by Victoria Crowe’s paintings of trees) is the new Trumpet Concerto by Thea Musgrave, a CBSO Centenary Commission supported by the John Feeney Charitable Trust, and premiered at this summer’s Cheltenham Music Festival, played there as well as here by its dedicatee Alison Balsom.

Musgrave has picked up on Balsom’s desire to make her instrument sing, and the soloist responded gratefully to the sustained melodic lines — including a tune from the composer’s native Scotland — as well as rattling out passages of brilliant articulation.

There are also theatrical duets with various orchestra members, with one slapstick mime with the principal cellist, culminating in a highly moving collaboration with an initially offstage trumpet, the excellent Jonathan Holland eventually taking up a position onstage, ending with a radiant major third from the two instruments. Applause was deservedly prolonged.

Finally came excitement as much for the huge orchestra as well as the audience, the Symphonic Suite arranged by Christopher Palmer from the music of Walton’s only full-length opera, Troilus and Cressida. This proved a real find on both sides of the footlights, a score of gripping emotion, communicative directness, positive dramatic impetus, and typically Waltonian Mediterranean warmth.

Under Mirga the CBSO produced a big, rich sound, the many showpiece solos eloquently shaped, everything perfectly placed and balanced, and a little bird tells me that these forces will be soon be recording the work in Hamburg for DG.

All CBSO100 reviews are archived here.

« Domingo is in Mexico to receive major award