Exclusive: Last shot of Placido Domingo at the Met

This was the dress rehearsal at the Met for Verdi’s Macbeth, the one we will never see, with Anna Netrebko and the soon-to-be ousted Placido Domingo.

Operalover Sophia Cerovsek took this picture, which we present as one of the great might-have-beens.

Sophia tells us: ‘This photo will remain for me a very special memory and how it came about is kind of strange: I received a last minute ticket gift for the “Macbeth” dress rehearsal by my dear friend Richard Reissig, who came with our mutual friend Karen D’Angelo. Trish Cowart Krulin was also part of our group as we settled into our 8th row seats, just a few rows behind Placido’s family.

‘An announcement was made not to use flash, which I interpreted as taking photos without a flash would be permitted. But I knew they wouldn’t turn out well since it was so dark, nevertheless I took a few. At one point I changed inadvertently settings on the camera by turning a tiny wheel (in the dark), but have no recollection which setting I ended up using. After I down loaded the photos I found most of the dozen or so rather grainy and fuzzy, but then: there was this one: just perfect.’ 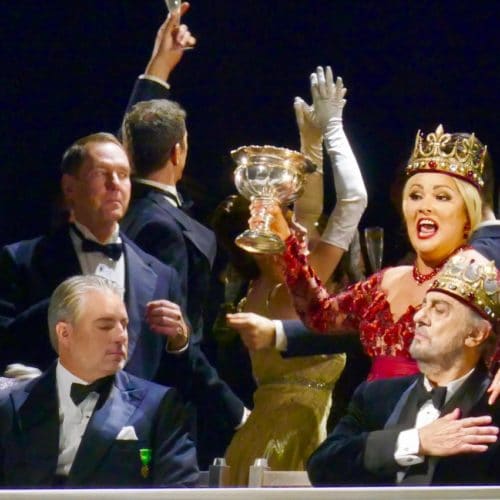 And here’s the final curtain call: