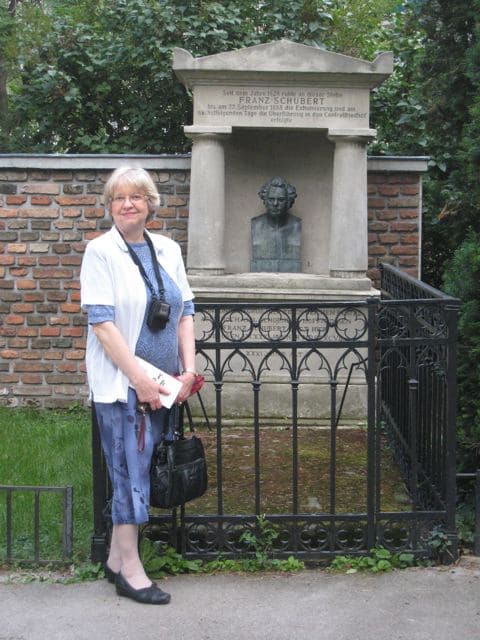 We’ve been informed of the death in Vienna of the Canadian musicologist Rita Steblin, author of a sheaf of papers on Beethoven and Schubert.

She took up cudgels when Maynard Solomon endorsed the fashionable view that Schubert must have been gay because no-one ever saw him out with a woman. Rita let fly with a fiery paper here and various other body blows – for instance, this in the NY Review of Books:

I wish to take issue with Charles Rosen’s article “Music à la Mode” in the New York Review of Books of June 23, 1994. After summarizing Maynard Solomon’s theory about Franz Schubert “cruising for boys,” Rosen writes that “this created consternation among Viennese musicologists and their allies, who saw a takeover of Schubert by the Homintern, and have proceeded to invent an Immortal Beloved for Schubert like Beethoven’s and even to suggest that the keys of Schubert’s works are a secret code that identifies the name of the lady.” Since it is my work that Rosen is spoofing here, let me go on record that there is no Viennese plot to manufacture a heterosexual Schubert, just a Canadian seeking the truth.

I find it curious that so much space has been devoted in the press to publicize Solomon’s 1989 article from 19th Century Music about Schubert’s alleged homosexuality, but now that I have challenged this theory, Rosen does not even have the courtesy to mention my name. Is this an attempt on the part of the old boys’ network (or the new ideologues) to keep the public from reading my critique of Solomon’s scholarship? (See my article “The Peacock’s Tale: Schubert’s Sexuality Reconsidered” in the Summer 1993 issue of 19th Century Music.)

The memoirs of Schubert’s friends are full of his devotion to Caroline Esterházy, but perhaps this “fact” is unknown to musicologists and theorists who for so long have preached that music is autonomous from biography. If Solomon cites Eduard Bauernfeld’s diary entry from August 1826 about the ailing Schubert needing “young peacocks” (in German folk medicine eating peacock flesh was thought to cure illness), then he should also cite the same Bauernfeld’s diary entry from February 1828 about Schubert being seriously in love with Caroline Esterházy. Music becomes involved here because Schubert dedicated his Fantasie in F minor, written in early 1828, to Caroline.

F minor was traditionally a key of hopeless love, but the topic of key characteristics has been ignored by the same formalists who have ignored biography. The secret code of keys in Schubert’s works, as mentioned by Rosen, was part of my paper read at the annual American Musicological Society Meeting, Montreal 1993. In the last year of his life Schubert wrote such major works as the Piano Trio in E flat (autograph score owned by Caroline), the Violin Fantasy in C (citing the love song “Sei mir gegrüsst”), the Fantasy in F minor (dedicated to Caroline), the String Quintet in C (with the passionate “autobiographical” F minor section in the slow movement) and the Mass in E flat. The choice of keys here seems deliberate. Considering Schubert’s comment that all of his works were dedicated to Caroline and aware of the romantic era’s penchant for ciphers, I made a tentative connection between these keys and the initials of Schubert’s and Caroline’s names: F S (Franz Schubert) = f Es (F minor, E flat major) and C Es (Caroline Esterházy) = C major, E flat major (the common sound beginning their last names being Es, German for E flat). Rosen seems unaware that I presented this theory as a tongue-in-cheek attempt to bring attention to my 1983 book on the history of key characteristics, published by UMI Research Press. (I leave it to others to prove or disprove this notion about Schubert’s “romantic” use of keys.)

Perhaps we should study what it is about Schubert that makes him so attractive to fashionable political ideologies. Why did the Nazis abuse Schubert to promote their theories of pure Aryan race? This seems ironic now that a new portrait has surfaced (once owned by Parmenia Migel Ekstrom of New York and purchased on my recommendation by the Kunsthistorisches Museum of Vienna)—a portrait rejected as Schubert by several Austrian art historians because of the Jewish-looking features. (See my book on Josef Abel’s (?) oil painting of the young Schubert (?), published in 1992 by Hans Schneider Verlag.) And why, when the evidence is so questionable, is Schubert being promoted now with such passion as a homosexual composer?

« Having 2 orchestras is always better than 1

Daniel Barenboim ‘needs to wear a body-com at work’ »