The cellist Brinton Smith, principal at the Houson Symphony and professor at Rice University, had such a good time teaching class at Aspen that, by way of parting, he shared some life wisdom with his students. To his amazement, his words went viral on social media – 800 likes and 200 shares in 24 hours. It’s a thoughtful message, with a couple of stings in the tail. We’re happy to ahre it on Slipped Disc:

I have been almost as lucky as you can be in this business. I’ve had countless disappointments of course- some deserved, some not. That is the nature of the business. But I have a good job, a happy reputation, a balance between solo, chamber, orchestral playing and teaching, the good fortune to be friends and colleagues with some of the musicians I admire most in the world, and the respect of some of the peers that I care the most about. I’ve had the chance to travel, play concerts, enjoy the camraderie and live some of the enviable life. I haven’t had everything, but I’ve had as much as I could dare ask for a life in music. I have been very lucky, and you will be very fortunate if you are as lucky as I have been.

And I’m telling you that even if you get all that – even if you get all that and more… it isn’t enough. It will ultimately feel hollow. In the end, concerts are just concerts, victories are fleeting, fame is shallow, and easy praise dulls the senses. Dark moments will come, and your life in music, no matter how succesful, will be empty unless it is about something greater than your career. You must protect your belief that the music is part of something greater than yourself- greater than any of us. You have to keep studying and improving and trying understand more deeply. Believe in yourself, but believe also that you can do better- not just in a technical sense, but more beauty, more insight, more heartbreak- more music. As Mr. Heifetz said “There is no top. There are always further heights to reach.” We have never before had so many musicians of amazing proficiency, and yet it is rare to hear someone make truly beautiful music.

Whatever you do, whatever comes of your life in music, no matter how celebrated or ignored your role is, you must know why you have chosen to spend your life on this. As you face the harsh and humiliating aspects of our industry you must protect your belief in yourself, and in music and what it means. We live in the world of the automatic standing ovation, where praise is lavish and indiscriminate, and criticism is suspect. But in your internal world you must believe in a right and a wrong way, and that it matters. Make your life about something more than your job, your reputation or your ego. Be an example of what a musician should be.The moments of greatest happiness for me have ultimately not been some career milestone, but the moments when I learned something new, when I got one step closer to the unattainable. Love the details, know that they matter even if they don’t change your career, and never stop learning. This is not an easy path, but it is the only way to a meaningful life in music. My wish for all of you is that music will mean more to you at 60 than it did at 16, and that you will know the joy of humility, love and service to the most profound art I know in our world. 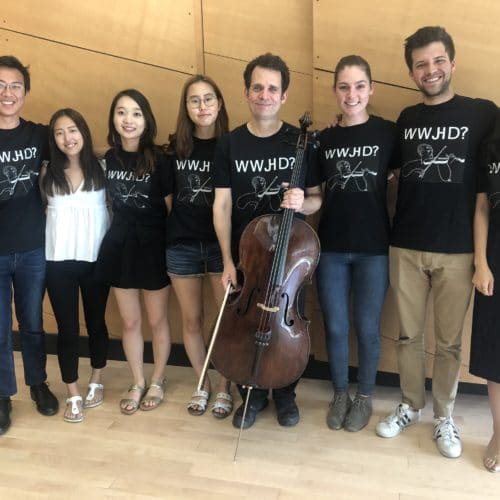