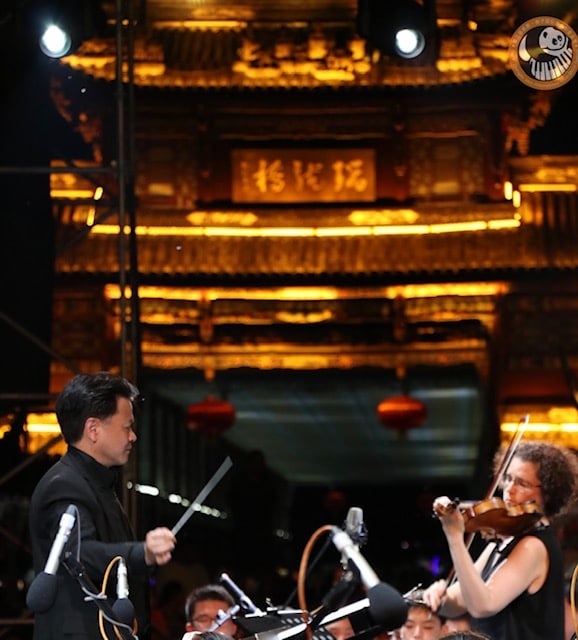 We’re the only non-Asians in a Chinese city

From our volin diarist Anthea Kreston:

I am 90 minutes outside of Chengdu, China – smack dab in the middle of the country, in the ancient town of Jiezi. The drive from the densely populated city – from downtown, then through huge rings of skyscraper clusters (each one looking like a city in its own right – like one of the futuristic movies where a post-apocalyptic, worn-out metal city in all-grey springs out of a cluster of jungle), then slowly into smaller towns, strips of large manufacturing complexes, then to teeny mixed fields of rice and fruit trees crowding closely to the road, bordered by irregular lines of corn and small clusters of traditional housing.

We arrived at our hotel – a large, newly built complex with window treatments reminiscent of a Bavarian village – red flowers draping down from hundreds of rectangular window boxes. The entire hotel seems to be floating on water – large stone pools surround – metal sculptures and modern fountains, small bridges connecting outside eating areas and various gazebos with stone ashtrays and traditional games laid out on tables, with white-gloved staff offering drinks. Throughout the complex, speakers hidden in rocks create a blanket of quiet, soothing Pipa and Erhu music. At the entrance, on a multi-tiered AstroTurf covered platform, with large white umbrella and cordoned with wide red and bronze rope, a handsome military sentry with aviator glasses stands firm.

Our area is just a five minute walk from the bridge to the ancient city – the main square lined by Gingko trees which are over 1,000 years old, and a stone pagoda – it feels similar to Venice – no motorized vehicles past the bridge, and the narrow roads are lined on both sides by sunken stone streams. To cross to the small stores, you have to step on one of the large stone fish evenly spaced in the water. Everything from steamed buns, clay-pot chicken, to tea and spices – 10-foot tall racks of drying meat (including pig heads), men beating steaming piles of cooked rice in huge stone mortar-and-pestles, shirtless workers hanging fresh noodles on bamboo sticks, and a smattering of clothing stores and trinket shops. And like Venice, just take a turn off a main thoroughfare and you can find yourself completely lost within a moment.

We are still the only non-Asians in town (there are some faculty at the festival who are non-Asian – a German cello quartet and a handful of wind and brass players from the States). We are still being followed when we go to town – mostly sweetly, but on one occasion a man grabbed my youngest by the upper arm – the imprint of his fingers still visible hours later. People offer us local fruits and foods to try, and take photos and videos of the girls.

The area we are staying in, just outside the ancient town, is part of an enormous newly planned mountain/stream vacation area for the Sichuan region. An enormous (and so far empty) grouping of conference spaces are encased in vaulted, dark wooden slats, surrounded by organized bamboo forests, and the tiered structures are lined with stairs/arena-style seating. Cranes fill the air, and some rehearsals (I am playing Schindler’s List with the band – it’s huge – it must have 15 tubas) are held in buildings which are not even quite finished being built. The chairs for the band are still covered with plastic – rebar sticks up above the construction fences from hundreds of partially built complexes, and tape crossed new windows – the floors beneath already inhabited – drying laundry hanging out of window. Out of the wall of windows from the band rehearsal, I see an impossibly lush vista of mountainous rain-forest, although the freshly-churned earth directly in front of us is being turned by large yellow bulldozers. Many trees were felled within my sight even during my short rehearsal yesterday. The interiors of the buildings are beautifully done – but a quick peek to the right or left belie another story – corridors which have an old dented teapot on a hot plate, noodles being cooked by a person in weathered local clothing, rooms lined with many bunk-beds for the hotel workers, in nearly window-less basement rooms, and the haste with which the construction occurs understandably leads to doors which open the wrong way, floorboards already loose, and loose wiring behind the cupboard doors in the hotel room. This is an entire city being built from a forest – a city for the wealthy of Chengdu to have a second home mountain getaway. There is even an equestrian facility going up along the main river – it looks like a huge albino dragon landing – right next to the locals bathing and doing laundry in the muddy, fast-moving river.

The ensembles are gigantic – last night outside the town square, the orchestra played – it’s the largest orchestra I have ever seen – heavily amplified, accompanied by a light show, and an audience like a rock show. Vendors line the road, selling noodles or watermelon from the back of their motorcycles. It’s quite an experience. We are heading out now to search for an antique map to add to my collection at home – I noticed a calligraphy shop in town. Many concerts are still to come, with elaborate receptions and dinners and drinks with new friends, new tastes and sights. 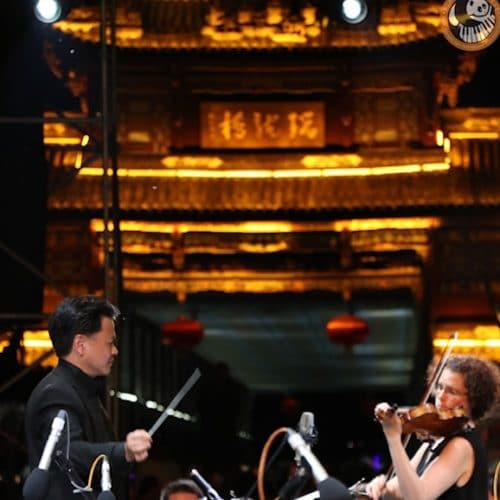 Domingo’s accuser: I suffered no consequences »