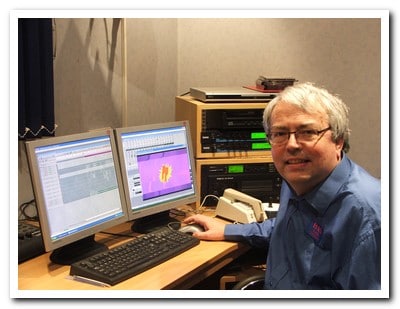 We have been notified of the death, after 12 years of cancer, of Richard Scott, founder of Manchester-based RAS Audio.

His name is on dozens of outstanding recordings.

Martin Anderson writes: ‘In the recordings that Richard made for Toccata Classics – no matter which orchestra or conductor, and no matter what venue – he always obtained a sound that gave you a full orchestral sound and yet enabled you to hear the detailed lines from which it was built up. And yet he talked about what he did as if it were as simple as delivering the milk. He talked about his illness in the same way – one of those things that comes along, nothing to get excited about – and he kept working as long as his strength endured.’

The conductor Paul Mann adds: ‘Richard created audio magic and did so with minimum fuss and maximum professionalism and good humour.’

The composer Steve Elcock: ‘I met Richard only once, when the Liverpool Phil recorded my Third Symphony for Toccata Classics in 2017. He struck me as very discreet, seemingly doing very little while Michael Ponder, the recording producer, was furiously scribbling notes on the different takes. Of course, I didn’t see the backstage. I left those sessions feeling quite gloomy, wondering how all those bits and pieces could possibly be fitted together into a coherent role. But they did, thanks to Richard. I’m sorry that I won’t be able to work with him again.’

Another job for Renee Fleming »