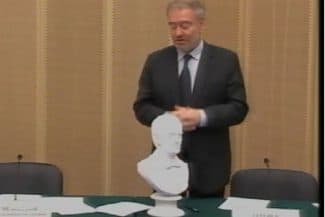 The absentee conductor, fiercely criticised for an underpowered Tannhäuser on his Bayreuth debut and unlikely to return any time soon,  has hit back in a Russian radio interview.

Gergiev said: ‘My responsibility is only to the composer, not to the one who wrote something (in a newspaper). Some 30 years ago, the great conductor Georg Solti told me: “Never read anything about yourself, good or bad.” That was his advice. I was very young then, and he is one of the greatest conductors of the century. So it doesn’t interest me much.’

He pointed out that the performance was widely telecast. ‘Hundreds of thousands of people can judge for themselves. The rest is nonsense.’  He compared the almost-uniform bad reviews to the pro-Ukraine demonstrations he faced in the US. ‘If you think about these things, you will lose your head and forget what your profession is. I think only about what I need to do.’