The quartet that took off with Star Wars

For a touring musician, waves of intense, complicated and high-pressure periods are intermixed with stagnant lulls, reminiscent of a boat lost at sea, arms languidly draped over the side, waiting for even a hint of a breeze or the spotting of a seagull in the distance. You will also be experiencing a jolt of shock between the worlds – home could be filled with chaos and diapers, complete loneliness, or sense of measured calm. Away can have 5-star or disgusting airport hotels, fancy dinners or ramen in your room, library concerts or Carnegie Hall. Just depends person-to-person. But anyway, the differences between your two worlds will certainly be stark, no matter what. And these periods – both of them – are always different lengths. Two weeks of crazy intense travel and performances with erratic sleep and eating, 3 days at home with shopping, cooking, doing taxes and helping with math homework. Or 4 days away, 2 weeks home. In any case, the only thing that remains steady is the flopping back and forth.

This pattern is disorienting – to remain stable emotionally takes vigilant care, and if you have a relationship at home, the maintenance of that – both during the home and away periods – can’t be controlled. You are dealing with your own rollercoaster emotions and those affect others – and those other people have their own s*** to deal with – and their own patterns of dealing with you showing up or disappearing willy-nilly.

When I get done with a busy period, I often do a number of things to settle – I take a jog in the woods every day, pull out a huge puzzle, reorganize the kitchen. And I play video games late at night after my family is asleep. I just finished a charming puzzle of dogs sitting on apples, made a pot of curried chickpeas, can fit back into my favorite jeans, and am once again playing Red Dead Redemption 2, a single-person period game based in the early 1900‘s in the Wild West.

I was invited to the Mayor‘s House in Saint Denis recently, the largest city in Red Dead – it’s like a brand-new New Orleans with a heady mix of new arrivals from different lands, risky new business ventures, new money and scientific discovery, squalid living and gargantuan mansions. I went to the haberdashery, got my mutton-chops trimmed, saddled up and headed to the big party. I was enjoying a cigar on the wrap-around porch, overlooking the garden teeming with the “who‘s-who“ in town – plumes on hats, waiters in tails, and hired guns patrolling the perimeter. While planning an intricate heist of a gambling riverboat, I distinctly heard a very chunky and powerful rendition of the scherzo of the Death and the Maiden String quartet. Where on earth did this quartet come from? On my forays through town, I saw no advertisements of “Geigenbauer“ or “Orchestra Concert Tonight!“. Who does rehairs in town, and can I get a lesson? These questions and more prompted me to excuse myself from the planning meeting and to try to find this quartet.

The garden was immense, but eventually I found a charming gazebo, with four burly men in tuxes and handlebar mustaches. The cellist was having some sort of endpin problem, but what can you expect when dealing with this extreme humidity? Their bowing were great – by the time I had reached them they had switched to Haydn – no Flonzally Favorites for this group. Had they come over on a boat with Dvorak? Or perhaps they had travelled on the very riverboat I was planning on robbing? Maybe they were ex-students of Joachim, or possibly was the second violinist Florizel von Reuter? He was born in Iowa in 1890 – I had heard so much about him – he had studied in London and Geneva, and was renowned also as a medium and psychic. His books on his conversations with deceased musicians were still forthcoming – that page-turner “A Musician‘s Tales with Unseen Friends“ is a must-read for anyone interested in the latest in double-degree offerings at The National Conservatory of Music of America in New York City.

These guys were just at their break, and I was able to catch up with the cellist, while the others ran quickly to the buffet table, where they were shoving pastries in their mouths like gerbils preparing for a harsh winter, and shoving wedges of cheese into their tux pockets (some things never change). Turns out his name was Andrew Yee, and the quartet – Attacca – was based in New York City. They had recently played the entire Beethoven Cycle in Buffalo and seemed to be quite busy playing concerts all around the darned place. Amidst conversations about where to get a decent adjustment or how to craft a bow from salvaged materials, I was able to get some real answers as to how they managed to get this tasty gig.

Anthea: how did you get this tasty gig?

Andrew: I think they had seen our Star Wars Video we made a couple of years back. They just said they were motion capturing a string quartet for an unnamed project. We weren’t sure if it was for the next Grand Theft Auto or what, but it was exciting because we are all gamers. We are more of a Nintendo quartet though. We all love Zelda, and have played most of the titles.

Anthea: What was that day like, when you did the gig?

Andrew: The day we got in we were suited up in motion capture suits and they had asked us to play specific quartet movements all in d-minor. It was actually fun to be assigned these pieces that we already knew so we could just go in and have fun.

Anthea: Can Players interact with you during the game?

Andrew: I haven’t actually played the game, but I think initially you were supposed to be able to interact with us, but they added a barrier. I think they said that f-ing with us was going to be against the rules in the final product, but I don’t know if that panned out.

Anthea: Do you look like that in real life?

Andrew: Our quartet is split gender and in the game it is 4 men with gigantic mustaches, which is kind of historically accurate in its own way, I guess… I think the cool thing is that up bows are up bows and down bows are down bows. It’s actually really funny to see a video game character make suspicious bowing choices that I really believe in.

Anthea: Do you normally do work like this? I know you also just played the Beethoven Cycle in Buffalo….

Andrew: We do a lot of studio work, but it is mainly for rock bands and things like that. We are hoping that Nintendo will see how well we translate to video games and poach us. We have so much rep already learned! 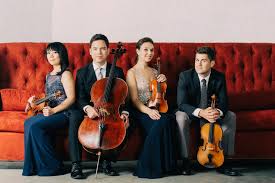