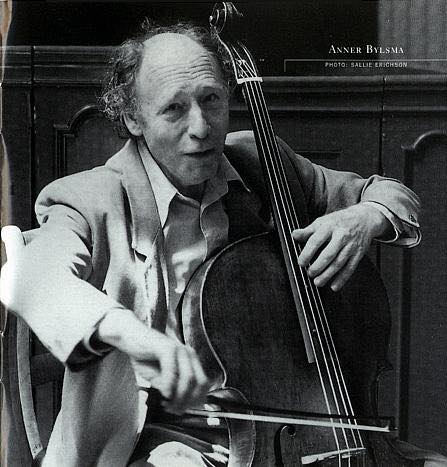 The difference that Anner Bylsma made

Tributes are flooding in for the Dutch cellist who died yesterday, a man who rewrote the rules of cello playing.

Here are some penetrating thoughts.

We all owe him a huge debt. In those early days of ‘Early Music’, which sometimes tended towards a po-faced Calvinism, he had a sense of humour and a sense of discovery. While others were methodical, he rejoiced in what can be learned when mucking about, “like an old man in his potting shed” – what he called ‘bricolage.’

He commanded the respect of cellists of every stripe, because he could REALLY play the cello, but also their envy because he PLAYED WITH the cello. In an age where the tyranny of ‘CD quality’ technical perfectionism was beginning to stifle live music making in classical music, he was a devil-may-care risk taker. That playfulness and risk taking could also be called cavalier -and things sometimes did go wrong.
The stories are legendary. Before a packed Bach recital, he read out to the audience the review of a recent (apparently disasterous) performance of the Kraft Concerto, offering to refund tickets. My favourite (perhaps apocryphal) was when he took part in an all-star line up for a complete Piatti Caprices concert at the Manchester Cello Festival. As he went on stage he asked “Which one am I playing..?” Richard Egarr and I accompanied him in a recital of Vivaldi Sonatas on Marie Leonhardt’s course at Casa Mateus. I learned an enormous amount from him that week – it was life changing – but somehow there was never the right moment to rehearse Vivaldi. An ice cream parlour next to the church put paid to our final chance to rehearse. As we went on stage I asked “What about repeats?” “You’ll know” he said, and we did.
His 1979 Bach SUITES for RCA were not just ‘important’, they were epoch making – vivid, brightly coloured images which made previous interpretations sound black and white.

Thank you for a life of inspiration, cher Anner Bylsma❣️❣️ You transformed my perception and understanding of music!

Here is my own anecdote with Anner Bijlsma: years ago when Nabí Cabestany and I were rehearsing the first Beethoven sonata for cello and piano in Mateus, Portugal, we hadn’t realized that he had been listening by the door for a while, when we finally stopped, he turned to me and pointed at Nabí: “now HE is a cellist, and what a cellist he is.” I am sure that the whole world would agree with me when I say Anner OWNS these words and they apply directly to him. If anyone ever played an instrument “authentically” in the sense that their personality is inherently embedded in their music, Bylsma is the first who comes to my mind. The angels are singing louder and brighter today. RIP, dear Anner, you have touched the lives of so many.

From Abraham Aragundi:
Dear, Anner…. you are the reason why I decided to undertake a career as a cellist. You started it all, in middle school, when I bought your recordings of Vivaldis cello sonatas. You were and will always be my inspiration. ….genuinely heart broken right now.