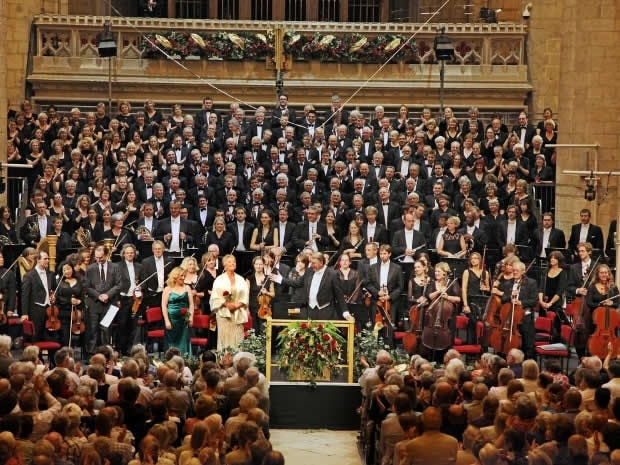 Threats and misinformation from Brexiteers have prompted a box-office slump for Beethoven’s 9th symphony at Gloucester Cathedral.

The festival’s chief executive has sent us this placatory statement:

On Friday, I became aware that a report was being filed in the Observer relating to a complaint I received regarding this year’s festival and the programming of Beethoven’s ninth symphony. I feel it’s important to respond and to clarify some misconceptions.

Shortly after announcing our programme in late March, I spoke with a gentleman who planned to boycott the festival – and encourage others to do the same – because he felt the inclusion of Beethoven’s Choral Symphony was a pro-EU provocation in a region with a strong ‘Leave’ profile. Our conversation was measured and respectful, but despite my assurances that the choice of repertoire was apolitical, and his own long-standing devotion to our event, he remained determined to avoid the festival this year. Although I regret that he will miss a magnificent week of music-making and conviviality, and do not share his views, I respect his right to express them.

Ticket sales for the festival overall are healthy, but it’s true that sales for this particular concert are below the level we would generally expect for our final night (although we’ve sold almost a hundred more since this story broke)! There are likely to be several reasons for this: the other major work on the last night programme is a rarely-performed and unfamiliar work – The Mystic Trumpeter – by Cheltenham-born Gustav Holst; there could be other local events which have diverted audiences; bookers might have decided they prefer some of our other 70+ events. Additionally, there’s a general trend emerging for people to book later, so all I can say with certainty is that two people are not attending this event because of a perceived connection with Brexit politics.

As our Artistic Director, Adrian Partington has already made clear, Beethoven’s inclusion was not politically motivated. I expect this is true of most, if not all, other performances taking place this year, including one at the BBC Proms a fortnight after our own. We’re staging a magnificent, celebratory work to close a festival which sees thousands of people – audience members, internationally renowned performers, our locally-sourced festival chorus and a host of dedicated volunteers – come together through a shared love of music. While there’s no denying that music can be, and is, used as a powerful tool in communicating a message, it should also be allowed to stand as a simple expression of creativity; a monument to the extraordinary achievements of human cultural endeavour and a common language that has the power to move us all, regardless of our politics.

I’ve been saddened by the aggressive nature of some of the responses directed at the complainant described in the article. Events in Strasbourg last week have made an isolated conversation suddenly topical, but the response seems symptomatic of a deep division which will not be bridged by what amounts to little more than name-calling. Perhaps it’s appropriate then, to quote the other composer in our contentious concert (composer of, among many other things, the tune to the hymn “I vow to thee my country”), Gustav Holst: “I believe most thoroughly in comradeship in all shapes as being the ideal of this world”.

When we come together on the 3 August, I hope we can celebrate the performers’ achievements – it’s an extraordinary feat of stamina to cover so much repertoire to such a high standard over the course of the festival – and let the music speak for itself. It is joyful music – I hope we can all raise a smile.
Alexis Paterson, Chief Executive Monday 8 July 2019

« Good news: Boston gets its concertmaster back