After all the previews, no major media descended on Tulsa, Oklahoma, to review Lucia Lucas, a transgender baritone, sing the first Don Giovanni of her kind, curated by the composer Tobias Picker.

For the time being, there is just the one rave review in Tulsa World. It is not readable outside the US, due to EU restrictions.

In the title role, Lucia Lucas is nothing short of a revelation. She possesses a voice that can rattle the rafters with its power, without ever sacrificing subtlety of expression. It is a voice filled with character in every sense of the word, as flexible in expression as Lucas is in taking on
the myriad personae Don Giovanni adopts as he goes about his lecherous business. 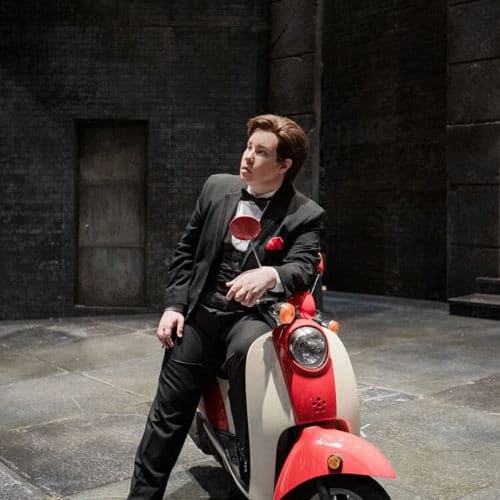 UPDATE: From MusicalAmerica’s review by Clive Paget:
Oklahoma–If ever proof was needed that opera can still surprise, provoke and even have something to say, the Act One Finale of Opera Tulsa’s Don Giovanni is it. Updated to America (ish) and sometime in the 1950s (ish)—neither are entirely clear, or indeed that relevant—this Don is all of a sudden revealed as the life and soul of his own party, strutting his considerable stuff in full drag—or is he? For a moment, our gender compass goes haywire, for this production stars the impressive trans baritone Lucia Lucas. What we are watching is a woman who has been playing a man, now playing a man who is dressed as a woman—and loving it. Confusing? For a second, perhaps. But’s a glorious moment in Denni Sayers’s occasionally uneven production that received its premiere by the 71-year-old Tulsa Opera at Tulsa Performing Arts Center on May 3.