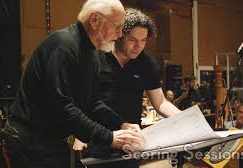 A match made by John Williams, no doubt:

Steven Spielberg’s West Side Story announced today that acclaimed conductor Gustavo Dudamel will be guiding the baton for the film’s recording of Leonard Bernstein’s iconic score.

Also part of the music team are Oscar-nominated composer and conductor David Newman (Anastasia) who will be arranging the Bernstein score for the new adaptation; Tony Award®-winning composer Jeanine Tesori (Broadway’s Fun Home and Thoroughly Modern Millie), who will be working with the cast on vocals; and Grammy®-nominated music supervisor Matt Sullivan (Beauty and the Beast, Chicago), who will serve as executive music producer for the film.

“Since the moment West Side Story hit Broadway in 1957, Leonard Bernstein and Stephen Sondheim’s iconic music has helped define America’s musical identity,” said Spielberg. “To find a team with the experience and talent to honor the original work – while bringing a fresh vision to our new adaptation – was a tall order. I’m confident that this incredible group will do just that, and I am privileged and grateful to have them as partners on this journey.” – Steven Spielberg, Director

A symphony for dementia »