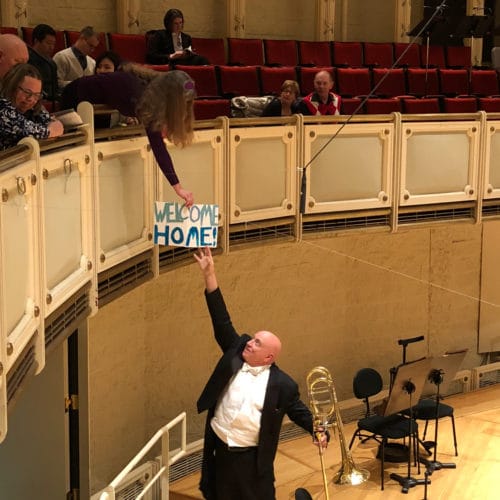 On Thursday, May 2nd, Chicago welcomed its displaced musicians home to Orchestra Hall after seven weeks of picketing that, for the second time this season, raised painful questions about the worth and function of a classical musician. This wasn’t your typical labor dispute, where two entities struggle for the upper hand and dollars are pushed and squeezed like teenage acne.

Rather, following only seven months after the Lyric Opera Orchestra reluctantly took to the streets, the CSO’s issues made us wonder if our city’s Big Shoulders are no longer quite broad enough to sustain a level of musicianship that has been admired for decades.

Usually a strike means not working. But our symphony players realized that embracing silence was not what they were born to do. Hence, this strike was not a refusal to work, it was a refusal to STOP working. The musicians knew the urgency of reopening Symphony Center. They knew the danger that foments when music exits the lives of humankind, and they knew that the service they provide goes way beyond municipal revenue and gala festivities. Not only were all visiting artists collaterally banished from our city’s main music hall, but the dispute threatened to topple Chicago’s training orchestra, Civic Orchestra, who also lives and works at Symphony Center. Even Illinois’ fledgling high school musicians, Chicago Youth Symphony Orchestra, would have been shut out of their season finale had the strike continued through May. What would the effect be of these institutions floating away with the early morning Lake Michigan fog? And so the beleaguered musicians did the thing they have trained their whole lives for, they performed. They scheduled entire symphonic concerts in various neighborhoods, lovingly conducted by Jay Friedman, principal trombone and newly minted-octogenarian. They also scheduled concerts with smaller ensembles, and they did all of this with no payment.

People voiced confusion regarding the free concerts. “If they need money, why play for free?” some asked. “If they love music, why ask for a salary?,” others grumbled. The answer is simple, and let’s let violist Max Raimi explain: “One of the plagues of our time is how dissociated we are with each other.  We are holed up in our homes looking at screens, holed up in our cars, or engrossed in our phones even in public spaces. Now more than ever, musicians are needed to provide a ritual where people create a congregation, for once experiencing something as a community. No matter how well a rehearsal goes, there is a palpable difference in the evening when we feel the presence of our audience around us in the concert; it is a deeply spiritual experience.  While I love many musical genres, I feel that the greatest classical music performed at the highest level provides this spiritual nourishment in a unique and irreplaceable manner. It was difficult over the last seven weeks not to feel degraded, as this gift, rather than being valued, seemed to have a price tag attached to it.”

This was their goal, to get back onstage as soon as possible and create, create, and recreate experiences for the public. We can all be grateful to Mayor Rahm Emanuel for being able to put his special confrontational talents to good use, and the deal was done. But the strike wasn’t over until the music started up again.

The return coincidentally fell upon a portentous program of Rome-centric works by Bizet, Berlioz, and Respighi. From the pregame warm-up, the musicians made it clear that it was business as usual, they were not looking for glory nor adulation and seemed quietly surprised each time the audience rose to their feet with extended applause. Even Maestro Muti seemed especially understated, as if to stand aside and let the musicians have their moment. The awe-inspiring Joyce DiDonato blessed the newly reopened hall by effortlessly bending her spectacular vocal range around every corner, planting her powerful low notes like oak trees down on the stage, and sending her diamond-like high notes as shooting stars into the audience. Here Muti and his musicians showed off their accompanimental prowess, gliding along like a lush velvet magic carpet for DiDonato to fly on, like a hypnotizing genie.

There could not have been a more fitting ending to this homecoming than the illustrative Pines of Rome. No conductor alive today knows how to build a triumphant climax the way Muti does. His opera expertise enables him to draw out the longest line possible, sleight of hand that can seamlessly connect the last note of a concert back to the first note played two hours previously. Hearing the build up of the army marching on Via Appia was like watching someone construct a castle with his bare hands. Muti and his faithful soldiers played out the endless B-flat coda like a call to arms, rising in courage and dignity until the shimmering final chord. Rome is messy, beautiful, complicated, just as is Chicago. But the music is back on, and we are all better for it.

“…so I turn once more to those who sneer at this my city, and I give them back the sneer and say to them:

Come and show me another city with lifted head singing so proud to be alive and coarse and strong and cunning.”

(Charlie Vernon accepting a homemade sign from a fan)