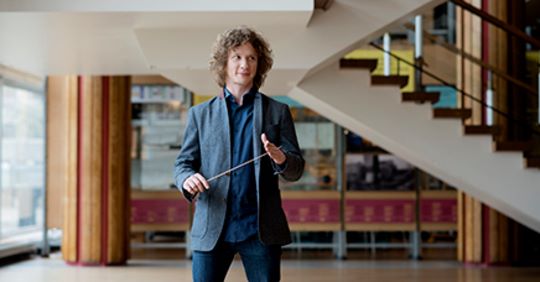 Aside from the new conductor’s youth and energy, it’s not the smartest appointment in the present climate.

The Philharmonia has been losing profile under the absentee Salonen. It will not gain much from appointing a double-barrelled, relative unknown of identical origin, albeit from a very narrow field of tested candidates.

The South Bank orchestras these days seem to look no further than the end of their noses.

The Philharmonia last week parted company from its managing director. Perhaps we can now see why.

Rouvali has signed a five-year contract to work with the Philharmonia for 10 weeks a year. He remains chief conductor in Gothenburg, Sweden, with a new contract taking him up to 2026.

From the press release:
Santtu-Matias Rouvali was born in Lahti, Finland, where his parents were both members of the Lahti Symphony Orchestra, and he grew up in and around the orchestra. Trained as a percussionist and with experience playing drums in rock bands, he took up conducting at a young age, and studied at the Sibelius Academy. His first principal conductorship, which he still holds, was in Tampere, Finland, where the orchestra has had to repeat concerts because of the “Santtu Effect” on audiences for classical music in the town.

UPDATE: Several players have told us they are excited. Maybe they are right to be.

On the other hand, there was a time that the public took a keen interest in who headed the London orchestras. No more.