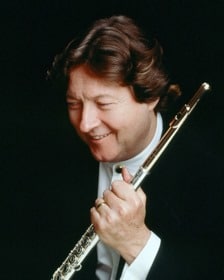 Death of a flute virtuoso, 73

The family have reported the death of Robert Stallman, a sought-after performer of contemporary American scores and an influential teacher at New England Conservatory.

Stallman, who was 73, premiered works by Harbison, Karel Husa and many others.

It is with great sorrow that our family shares with you the sad news of Robert Stallman’s unexpected passing, yesterday, March 12. While our Bob has always had such deep inner aliveness, whatever the circumstances, it was difficult to know how ill he was…it seemed he would vibrate forever. He could even fool doctors. As his beloved mentor, Jean-Pierre Rampal, once said, in their joint NPR interview with John Rubenstein in 1984, Robert is “une force de la nature”.

The Met puffs up a tiny rise in its bottom line »