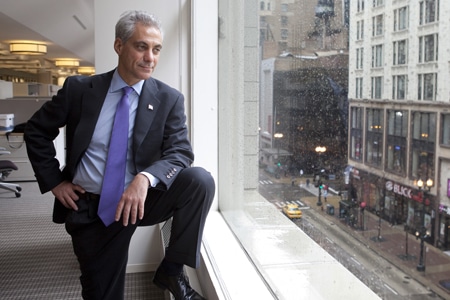 Chicago Mayor: How I settled the Symphony strike

From an interview with Rahm Emanuel in today’s Tribune:

Q: One of your last acts was dealing with the strike at the Chicago Symphony Orchestra. Why choose that?

A: You have all of these waiters and stagehands who are not performing but whose livelihood is dependent on the performances. They had to have a voice at the table and a sense of urgency to their situation. And the Chicago Symphony is one of the great symphonies of the world. We are a world-class city with a global presence: the symphony, the Joffrey, Steppenwolf. That’s what the architectural biennial is about. That is one of things we’ve tried to do differently these years. Besides all the investments in the neighborhood, we’ve pressed Chicago up as a global presence on the international scale. If you have one of your main cultural pillars lose a season that begins to have a cascading effect.

Q: What was the nitty-gritty?

A: You have to go back five weeks. Marilyn Katz (a consultant for the musician’s union) asked me to go on the picket lines. I said no. I said you’re going to need a third party. Then two weeks ago, I emailed (Symphony board chair) Helen Zell and told her I was thinking about intervening. She said they didn’t need it. But the press release from the musicians saying (Riccardo) Muti was coming soon told me that they were ready to make a deal.

So I told both sides, I’m issuing a press release inviting you to negotiate in my office. Then I told each side the other side had said it was going to say yes. That’s part of the art of negotiation. Both sides came and then I asked each side for their latest offer, but also where they had started eight weeks ago. Then I asked each side to describe their proposal in front of each other. And then I sent them to separate rooms.

Before they went, I said, give me your dietary restrictions and you’ll get all the food you want, but nobody goes home before this is settled. But because this is Friday and the Sabbath, I am going home at four-thirty, and I will either tell everybody you’re a bunch of schmucks or I will praise you all. It got settled at 4:22 p.m. Literally.

« Sad death of an Italian pianist, 54

A store cleaner comes out as a classical pianist »