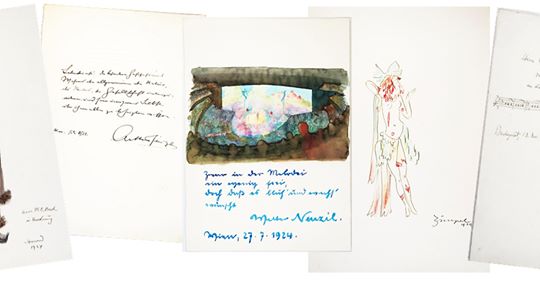 If you think your bequest will be held forever in college archives, think again.

Gonville & Caius College, Cambridge is selling what is known as the ‘Box of Delights’, presented by Caius alumnus Dr Philip Marriott (1965) in 2004.

It consists of of 87 paintings, sketches, musical compositions, poems, stories and vignettes by some of the most celebrated artists, writers and musicians of 1920s Vienna, including Arnold Schoenberg, Richard Strauss, Béla Bartók, Oskar Kokoschka, Arthur Schnitzler, Karel Capek and Stefan Zweig, and will go on sale at Sotheby’s on Tuesday 11 June.

Dr Philip Marriott inherited the box from his adoptive father, David Bach’s nephew, Herbert Bach. It was Dr Marriott’s wish that these beautiful works, would receive the care and attention they deserve.

At Dr Marriott’s request, the proceeds will be used to help the College and his old school to provide outstanding educational opportunities for future generations of students. This will honour David Bach’s belief that art and education should be made available as widely as possible.

« At this competition, judges don’t talk

Vienna chief is in the running for La Scala »