Anthea Kreston: Inside the Chicago strike

The Chicago Symphony Orchestra returns tonight after seven weeks on strike. Our diarist, Chicago to her socks, has been trying to find out what went right, and wrong.

What function does an orchestra serve in the community? As a Chicagoan, born and bred, I have been following with particular interest the recent events of the Chicago Symphony Orchestra. An orchestra, be it in a small, rural town, or bustling metropolis, is an indicator of the health of that community. Not just the musical health, but the entire ecosystem from commerce to education – it is one of the keystone species of its home town.

‘A keystone species is an organism which has a disproportionately large effect on its natural environment relative to its abundance,’ according to Wikipedia. Think the wolf at Yellowstone, the sea otters of the kelp forests. Although these species are not necessarily the strongest in the ecosystem. The keystone in an arch isn’t the strongest stone – it is strategic, and without it the structure collapses. All other parts of the community are directly and permanently affected. The members of an orchestra are the professors in the region’s universities – they teach privately, sit on competition juries and serve as soloists for the farm-team orchestras. Their spouses and families play roles in the community – teaching at the public schools, playing in lesser orchestras or chamber groups, or simply by being megaphones for the orchestra (often the families live in the suburbs, further spreading the influences). Their kids go to Eastman to study music, becoming performers and teachers themselves. Local businesses are affected – from the service industry to tourism. The pay scale represents the size and importance of the city – just like in sports. The biggest cities need to pay the most in order to attract and keep the highest levels of musicians.

When I was growing up, my parents had a Wednesday night subscription to the CSO. That meant babysitters for me and my two older sisters, and stories during the week of what was played (that music would be wafting around the kitchen while meals were being prepared). We all learned those pieces, got dressed up and went downtown to the concerts on occasion – pointing to the musicians we knew in the orchestra, waiting by the stage door to catch a glimpse of our heroes. They were our teachers, our coaches, the people playing in the local chamber music series. And they were ours.

Later, as I began to make a name for myself and to have actual, paying concerts, I would have the opportunity to invite a member of the orchestra to be a guest with my quartet or trio, or to teach with me at a festival. One such person was the incredibly poetic and engaging John Yeh, who has been Assistant Principal Clarinet for the CSO since the tender age of 20. I have played nearly every possibly chamber work with him – from the trio version of L’Histoire to Mozart Quintet -eventually recording works of Hindemith for the Cedille Records, a Chicago-based label. He is all around town – from founding the Grammy award-winning Chicago Pro Musica to teaching at summer camps and coaching the local youth orchestras. He is a friend and mentor to the Chicago musical community, and I was able to catch up with him this week to get an insider view of the recent events. Thank you, John, for taking the time to show us what it feels like to be a musician inside this cultural keystone. You are a treasure to Chicago, and to the entire classical music world.

Anthea: Can you please give us a summary of the recent events?
John: Yes. On Saturday, April 27, 2019, the Musicians of the Chicago Symphony Orchestra ratified a 5-year agreement with the CSOAssociation. This was following a nearly 7-week strike, which began on March 11, 2019. This was the longest strike in the 128-year history of the CSO. The strike was precipitated by the refusal of the CSOAssociation to propose a fair contract with the musicians. The strike went on for so long because the CSOA failed to come to the bargaining table to negotiate in good faith. They attempted to impose a sub-standard contract on the musicians, which we overwhelmingly rejected. Then they kept canceling weeks of our season without any attempts to improve their contract offer. It was very discouraging to view our management and our board in this way. They thought nothing of the damage their behavior would wreak on the great institution.

Anthea: There was a lot of local and national support – what did that feel like?
John: This was one of the silver linings to the dark cloud! We have garnered such an outpouring of support and encouragement from so many communities worldwide. The vast public support we gathered during this extended strike was what allowed Mayor Emanuel to finally step up and mediate.

Anthea: What were the darkest days?
John: The darkest days were when the CSOAssociation refused to engage with the musicians in any meaningful negotiation. This showed their true colors. We will have a lot of healing to do.

Anthea: How secure do you feel now?
John: We feel secure for the time being, and are happy to return to the stage of Orchestra Hall with our dear Maestro Muti this week.

Anthea: Are you wary?
John: Yes, more than ever. We have seen how the ideological agendas of a small minority of the Board of “Trustees” can wreak havoc on the bedrock of a great cultural institution.

Anthea: Does this experience change the way you think about the future of musicians in the states?
John: Yes. We must all continually stand together with our brothers and sisters in other orchestras who may have to endure this sort of onslaught from union-breaking entities who have infiltrated their boards and managements.

Anthea: When you sit together as an orchestra on stage again, what will be different?
John: Every time we sit together on stage, the Chicago Symphony Orchestra experiences a sense of unity, collaboration, and sensitivity. Now, our sense of solidarity has become strengthened and even more unified. This is another great component of the silver lining to the dark cloud of the strike we have all endured together.

Anthea; What has changed in your heart or mind?
John: We are more resolved to resist any attempts to degrade our standard. We will now take steps to facilitate the removal of forces that would act to cut us down.

Anthea: Does the music mean something different?
John: Yes, just yesterday in a Chicago Symphony Winds concert at the University of Chicago, we had an amazing experience of playing for a most appreciative public. The music went out like love and telling a story of strife, unity, strength, dedication, beauty, and magic. I think each and every adversity we experience as deeply feeling musicians serves to enhance the communication we bring to our audience on a profoundly deep level.

Anthea: Were there some people who just didn’t get it?
John: There were some that didn’t get it, some of the public who didn’t know the complete story, or the history of our institution, of the need to honor our predecessors as well as our successors.

Anthea: What role did the Mayor have in the outcome?
John: He stepped up at a crucial moment, not a moment too soon, to mediate a settlement. He very clearly understood the damage being done to the city of Chicago by this work stoppage. He was instrumental to bringing our management back to the table for meaningful talks. They couldn’t ignore him, as they had ignored even their own subscribers, their own patrons, and their own musicians. 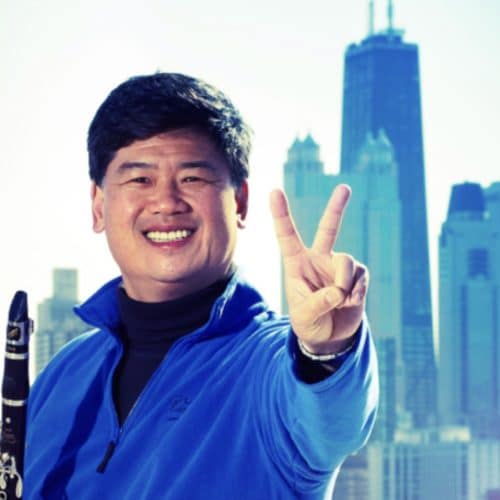