When Maestros encouraged applause between movements

In the course of a lively Twitter colloquium on a thorny topic, the Detroit critic Mark Stryker produced this letter from music director Osip Gabrilowitsch, dated October 1931. 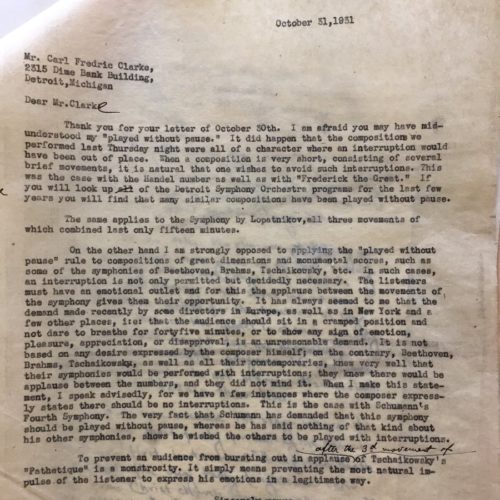 In it, Gabrilowitsch says: ‘It has always seemed to me that the demand made recently by some directors in Europe, as well as in New York and a few other places, i.e. that the audience should sit in a cramped position and not dare to breathe for 45 minutes, or to show any sign of emotion, pleasure appreciation or disapproval, is an unreasonable demand. It is not based on any desire expressed by the composer himself; on the contrary, Beethoven, Brahms, Tchaikovsky as well as all of their contemporaries, knew very well that their symphonies would be performed with interruptions; they knew there would be applause between the numbers, and they did not mind it.’

Gabrilowitsch knew what he was talking about. A friend of Mahler and Rachmaninov, he observed great conductors at work in his career as a concert pianist and he emulated them from 1918 as founding director of the Detroit Symphony. Mark his words.

The debate was triggered by this tweet from Samara Ginsberg:

Here’s something you might not know about classical musicians: the vast majority of us don’t mind if you clap between movements, and many of us love it. We just want you to enjoy the concert and would never look down on someone showing appreciation.