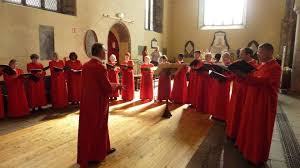 So how Christian is classical music?

The Dutch composer John Borstlap, a regular contributor to Slipped Disc, has been pondering an age-old question in a new essay.

The subject of this article is the relationship between classical music and Christianity – a tricky subject, since many people in the cultural field believe that it is difficult to find a cultural product that is more ‘outdated’ and ‘narrow-minded’ and ‘supremacist’ than Christianity as an organized religion. Also, there is a consensus that the farther away religion is from the concert hall, the better, in spite of the rituals in both concert halls and churches which are so alike. With church music – Bach cantatas, passions, Mozart masses and the like – the connection is clear and does not warrant any exploration, but secular music should be pure and unencumbered by associations with the context from which art music liberated itself long ago. So, I will tread carefully in this minefield of conflicting opinions, and will say right away that the Christian religion is much more than a religious nomination, organization, or a world view defined by circumscribed axioma’s and orthodoxies; it has played a prominent role in shaping Western civilization, and was to a great extent the cradle of modern society and its values, and its art.

It is not so that religions create religious people, but the other way around: from time immemorial people have been religious by nature, and therefore they create religions, in an attempt to find the most appropriate expression of their religious ideas. Christianity, like all the great world religions, is an expression in terms of symbols, narratives and metaphors of the normal human religious instinct, an expression born from universal experience of the human condition…. Here is the link with music, which is not material, but consists of more or less referential patterns of vibrations in the air, which produce meaning and the experience of presence in the listening process. As there are different musical cultures in the world, but all based upon a natural, material property of sound waves and their proportional relationships as demonstrated in the harmonic series, there are different religious world views which are all based, under the surface of appearances, upon the natural intimations of the human being. The differences in the forms of religion are accents, which lift some particular value from the whole of life experiences and throw a specific light upon them, colouring them with a particular value and interpretation. This is related to how people experience life, on a deep level, in different times and different places and cultures….

UPDATE: Or do atheists write the best sacred music?

« Alone in a strange land