Peter W. May and Oscar L. Tang were elected Co-Chairs of the Board of Directors of the Philharmonic-Symphony Society of New York, Inc., at the March 27, 2019, meeting of the organization’s Board of Directors. Each will hold the title of Co-Chair Designate until they become Co-Chairs in September, succeeding Oscar S. Schafer, who has held the post of Chairman since 2015. As Co-Chairs, Mr. May and Mr. Tang will serve as the Society’s chief volunteer officers.

They need to raise so much cash during the hall renovation period, it will take two strong men to carry it. 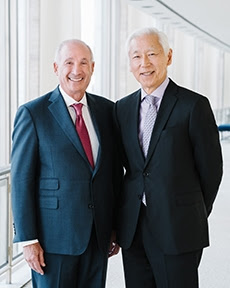