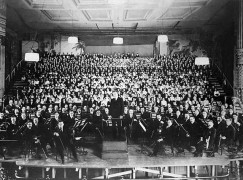 Sioux Falls, S.D. – The South Dakota Symphony Orchestra (SDSO) reaches a historical milestone with two performances of Mahler’s 8th Symphony, the “Symphony of a Thousand,” April 27-28 at the Washington Pavilion.

Gustav Mahler’s Symphony No. 8, dubbed the “Symphony of a Thousand,” is a massive work lauded as one of the greatest achievements in standard classical concert repertoire. While its first performance in Munich in 1910 brought together over 1,000 performers, the April 27 & 28 performances will have over 350 performers from across South Dakota on the Mary W. Sommervold stage, including:

· Eight vocal soloists from across the country

Music Director Delta David Gier and the SDSO have performed the Mahler cycle over the last fourteen years. “Every orchestra plays through cycles of Beethoven, Brahms, and Tchaikovsky; these works are our bread and butter and we’ll continue to play them. Few orchestras are able to play Mahler because of the scale and difficulty of his works, and even fewer can play through the entire of Mahler symphonies,” said Gier. “It has required much of us as an organization because of the commitment it has taken from our musicians, staff, and board of directors to climb this Everest of our art form.

“The orchestra members have looked forward to the Mahler symphonies each season because these works are so emotionally and technically challenging, yet immensely gratifying to play and to share with our enthusiastic audience,” said Gier. “Mahler himself considered to be his greatest work. This is his Beethoven 9th Symphony, his monumental achievement.”

Stokowski’s 1916 US premiere of Mahler 8

« Chicago cancels the rest of April

Alone in a strange land »