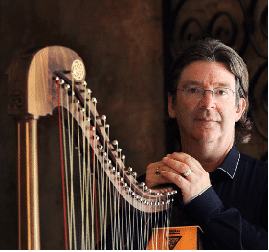 The early-music specialist Andrew Lawrence-King is seething over the cancellation of an offer from the Hochschule für Musik Detmold for him to set up a department for Historical Performance Practice. No reason was given for the withdrawal of the job offer. (Could it be Brexit?)

This is an open letter to the students and staff of the Hochschule für Musik Detmold, explaining why I will not be taking up the newly-created post of Professor of Historical Performance Practice, offered to me and accepted at the end of February.

This was a month of extreme contrasts, of intense demands, of high professional and artistic acheivement, and of personal loss. My encounter with Detmold Hochschule became part of this mix of triumph and tragedy.

I know of many cases, involving myself and others, where institutions have mistreated musicians, knowing that there will be little resistance. And I believe that I should tell this story, on behalf of other musicians who do not have the freedom to tell their own stories.

I remain passionately enthusiastic about the idea of establishing a 21st-century Early Music department integrated within a modern conservatoire, founded on cutting-edge research, evidence-based teaching and high-quality performance. I have invested considerable time and money planning and travelling to Detmold for interviews and meetings.

But without any warning to me, and apparently without consulting or even informing the Appointments Commission (the committee responsible for intervewing candidates and selecting a consensus choice), Rektor Grosse emailed me to cancel my week-long first visit and withdraw the job-offer.

This cancellation is most irregular, and may not be legal within the Hochschule’s rules and German law: it would seem to constitute breach of promise with me. At the very least, it is inexcusably rude.

« Collapsed maestro is confined to DC for slow recovery