So what will the new chief bring? All has just been revealed in Berlin.

There’s a lot of Beethoven, including a prison spell.

And a boutique mini-season for Emmanuelle Haim.

Interesting, though far from revolutionary. 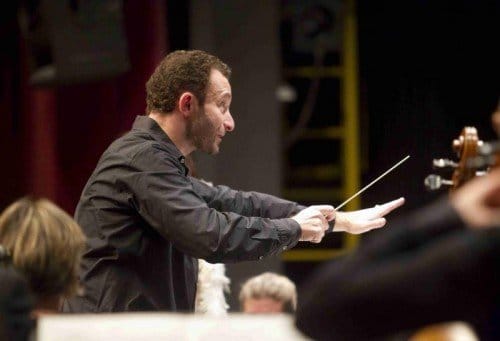 The opening of the 2019/2020 season marks the beginning of a new chapter in the history of the Berliner Philharmoniker: Kirill Petrenko begins his tenure as the orchestra’s seventh chief conductor. The traditional opening concert of the season at the Philharmonie on 23 August and the open-air concert at the Brandenburg Gate the following evening, part of the celebration of the 30th anniversary of the fall of the Berlin Wall, are the starting point for many collaborative projects whose energy will spread far beyond the city. The focus will be the concerts in Berlin, which will be supplemented by three tours with Kirill Petrenko: the festival tour at the beginning of the season, a German tour in February and, to commemorate the 75th anniversary of the end of the Second World War, the European Concert in Tel Aviv, followed by a European tour.

Naturally, the Berliner Philharmoniker will also congratulate Ludwig van Beethoven on the 250th anniversary of his birth. Three of his major works – the Missa solemnis, the Ninth Symphony and his only opera, Fidelio – are reserved for the chief conductor. Kirill Petrenko will conduct these works, which are so typical of Beethoven, both in Berlin and on tour. Sir Simon Rattle returns to the Philharmonie for the rarely performed oratorio Christ on the Mount of Olives. This programmatic focus will culminate with a Beethoven marathon on 25/26 April, during which all the composer’s string quartets and other chamber music works will be presented by musicians from the Berliner Philharmoniker over a two-day period. The quartets can also be heard beforehand during the Easter Festival in Baden-Baden, spread over ten days in the chamber music series, Master Concerts. In addition, Ludwig van Beethoven’s birthday will also be celebrated in the jazz series and the Philharmonic discussion series Discourse. The Education Programme will devote itself to Beethoven with a Fidelio project at Tegel Prison.

“His music was one of the greatest discoveries of the past few years for me,” says Kirill Petrenko about Josef Suk in his preface to the season preview. The Berliner Philharmoniker will focus on the composer both in symphonic repertoire – conducted by their chief conductor – and chamber music. Continuing the orchestra’s long Mahler tradition, Kirill Petrenko will interpret the composer’s Fourth and Sixth Symphonies. Another emphasis will be Edgard Varèse – a sound experimenter who defies categorization. The majority of his works for orchestra will be heard during the coming season.

Marlis Petersen as Artist in Residence

Soprano Marlis Petersen will serve as Artist in Residence this season – an exceptional singer who has cultivated a close musical friendship with Kirill Petrenko for many years. During this season concertgoers will have the opportunity to experience her from very different artistic perspectives. Marlis Petersen will appear as the soloist in Alban Berg’s Lulu Suite at the opening concert of the season, make her debut in the role of Leonore in Fidelio at the Easter Festival in Baden-Baden and give a song recital entitled “Anderswelt” (Otherworld). “The residency with the Berliner Philharmoniker is a great honour for me,” says Marlis Petersen. “At the same time it is a musical thank you from Kirill Petrenko for our previous work together. I’m very touched by that.”

The Education Programme of the Berliner Philharmoniker will continue to be an important part of the orchestra’s concert calendar. This work also means a great deal to Kirill Petrenko. For his first Education project he has chosen the opera Suor Angelica by Giacomo Puccini, which he will present together with the scholars of the Karajan Academy, vocal soloists and students from Berlin’s music academies and members of our children’s choral project “Vocal Heroes” at the beginning of February.

In addition to chamber music, another component is part of the DNA of the Berliner Philharmoniker. During the coming season, members of the orchestra will appear as soloists on seven concert programmes, for example, first principal violist Amihai Grosz and first principal cellist Ludwig Quandt, who will be heard as soloists in Richard Strauss’s Don Quixote during the two-week Japanese tour in November conducted by Zubin Mehta, who is an honorary member of the Berliner Philharmoniker.

Listeners can enjoy unusual programming next season in the form of short festivals. For example, the cultural bond with Israel will be highlighted: in addition to a guest appearance by the Israel Philharmonic Orchestra under Zubin Mehta during the Musikfest Berlin in September, the short festival “Tel Aviv– Berlin” will take place on 14/15 March. The Philharmonie will be energized for a weekend on 7/8 February with an electronic music festival entitled “Strom” (Electricity). The project will be organized by Stefan Goldmann.

Five world premieres, with compositions by Hans Abrahamsen, Peter Eötvös, Donghoon Shin, Toshio Hosokawa and Rachel Laurin, as well as two German premieres – Danny Elfman’s Piano Quartet and Peter Eötvös’s Alhambra – are on the programme for the coming season. Details on dates and performers can be found in the attachment “Information on the 2019/2020 Season”, in our season preview and on our website.

Since 1972 the foundations for many orchestral careers – both with the Berliner Philharmoniker and with numerous other leading orchestras – have been laid in the Karajan Academy. During the coming season, the members of the Karajan Academy will again work with renowned conductors: in addition to Susanna Mälkki, Ariane Matiakh and Zoi Tsokanou, Reinhard Goebel, Cornelius Meister and Kirill Petrenko will conduct the Academy scholars. Two works will also be premiered during a concert conducted by Peter Eötvös.

In addition to her orchestral concerts, Emanuelle Haïm will also appear in the series Original Sound, both as conductor with her own ensemble, Le Concert d’Astrée (27 November), and as harpsichordist with members of the Berliner Philharmoniker (20 October). Another noteworthy concert in this series will be presented on 27 October: conducted by Raimar Orlovsky and moderated by Reinhard Goebel, Concerto Melante will perform on instruments made by Jacob Stainer, whose 400th birthday will also be celebrated the following day with a symposium at the Museum of Musical Instruments.

The jazz series organized by Siggi Loch explores jazz from a variety of national perspectives, for example, with the Scandinavian Nordic Guitar Night on 24 September and a pan-American programme entitled Americana on 8 May.

The organ series opens on 13 October with a concert in memory of Jean Guillou, who died this year. His student Jean-Baptiste Monnot will improvise music for Sergei Eisenstein’s silent film classic Battleship Potemkin on the Schuke organ in the Philharmonie.

Marianne Birthler, Kevin Kühnert and Theo Koll will examine the theme “30th Anniversary of the Fall of the Berlin Wall” on 13 November in the discussion series Philharmonic Discourse. Musicians from the Karajan Academy will also perform.

Partnerships – 30 Years of Cooperation with the Deutsche Bank

Many of the projects mentioned above would not be possible without supportive partners, first and foremost the Deutsche Bank, which has supported the Berliner Philharmoniker for 30 years, with particular emphasis on the Education Programme since 2002. We are grateful that our shared goal of  making music accessible to as many people as possible has united us for so many years, and we look forward to continued collaboration.

We would also like to thank the state of Berlin and the Federal Government, which – with a self- financing share of 59.1% – provide the financial basis for our work.

Private sponsorship has also helped us for 50 years. The Friends of the Berliner Philharmoniker assist us in various ways, including enabling us to purchase instruments and regularly supporting special projects. We are grateful for this long-time support.

The rbb’s Kulturradio, Deutschlandfunk Kultur, ARTE and EuroArts are our media partners, with whom we have collaborated successfully for many years.