We’ve been sent for review a 1955 Stuttgart concert conducted by Ferenc Fricsay. 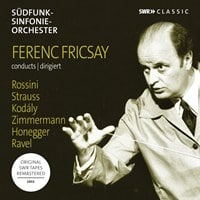 The sheer variety is breathtaking, a reflection of Fricsay’s brlliance at programme making. The colour are dazzling and each component complements the rest. The orchestral playing is edge-of-seat.

Why the hell are we stuck with two-work or three-work concerts these days? Whatever happened to ingenuity?