When the live iPad lets you down in mid-concert

I’ve been playing off my iPad Pro with Bluetooth foot pedal for just about two years now, and I love it. The inconveniences of sheet music – heavy to carry, bulky on stage (especially when it comes to those fast movements when 3 or 4 pages have to be out at once), noisy turns, turns so fast you barely make it, ugly folders – for me are easily outweighed by the convenience of the iPad, despite the very real (as the legends go) possibility of complete meltdown on stage. The dreaded blue screen, loss of battery, inability to load a score, endless variations of technical glitches. I am meticulous in my IPad preparation – from emergency external batteries to airplane mode, disengaging the ipencil before performance, double checking my foot pedal before each movement. So, when I started the Britten 2nd String Quartet two concerts ago, and the foot pedal was unresponsive to my check (despite the fact that is had been working just minutes before), I had the chance to quickly reconnect the Bluetooth onstage, and chalked it up to fluke.

That evening, after the concert, I replaced the batteries of the pedal, did a software update, and it behaved perfectly the next day during my couple of hours of personal practice and the quartet dress. The concert began with the Barber Adagio, from which I play off score, and as I began my one and only solo – a 30 second emotional bridge between the meandering cello solo and the apocalyptic first violin solo, pressing my pedal to turn the page (the turn is during a held 3 beat low e-flat on the g string, after which I slowly climb up the g string, rising in agonizingly slow intensity) – nothing happened. Not a flicker – I pressed quickly backwards, forwards, and knew I had to make my move. It was as if time stood still in those three beats, that low e flat. Quickly scanning to my left and right to see if anyone else was playing from a score, I saw that Vineta was using a score. Ok – I can always squish her over and read off of her part with her until I can find a moment to turn. Should I try to turn with my elbow while I am playing? But if my skin is too dry, it won’t work, and it will certainly compromise my sound. I couldn’t stop – this was a sustained moment with no relief. I just closed my eyes and played, believing that I had it memorized. I made it just fine, and was able to manually turn after I handed the solo to my colleague to the right. I could feel the concern from my peers, but I was confident, and I never let down my partners on stage – I pride myself in being reliable, and trustworthy.

Before the next piece, I was able to rework the connection, and did a full reboot and sync during the intermission. It’s probably just a faulty Bluetooth inside the pedal – I have a replacement now, and will travel with two pedals in the future.

But, that moment – the three beats on that low e flat – a million things went through my mind. I immediately flashed to a memory of a performance some 10 years ago – a student performance at a chamber music festival I ran for 15 years. It was in rural Wisconsin – in a town on a lazy lake, with one street that dead-ended into the bait and tackle shop – one bank, one general store, and a restaurant called “The Little Corporal” where you could nurse a terrible cup of coffee, served by career-waitresses in starched uniforms with their names stitched above the breast, for hours while perusing the Green Lake Reporter, with news ranging from local Rotary Club events to the Chili Cookoff and hunting tips (bow and arrow only for Deer).

These students came from all over, but a healthy number were Midwest born and raised. We had a great time together, worked hard, and played fantastic music. It was there, 10 years ago, that I met a young cellist, Frank (not his real name). Frank was a midwesterner, but hailed originally from one of those exotic locations on the other side of the planet which have been torn apart by wars for so long that the land is littered with unmarked landmines from any number of conflicts, buried by any number of nation-building powers or by civil unrest. It was one of these landmines which Frank accidentally activated as a very young child, setting of a string of events which resulted in him being adopted by a large midwestern family. They struggled together for years of surgeries as a result of his injuries, supporting his passions and interests, which were many, and varied. One of them was playing the cello, which required a creative path – Frank has 3 limbs, his left arm ending at the shoulder socket. His solution was to string the cello backwards, fingering with his right hand, and bowing with his left foot, with a modified cello bow.

Frank was a hilarious guy – very social, with a quick wit and a big smile. He was always the first to volunteer for anything – clearing a table, making copies for the orchestra. When heading to a farm to set up for a barn concert, he called out “load me on up!”, as he balanced 4 heavy black stands on his right shoulder, his cello and cello bag slung over the same shoulder as well. He explained to me while we walked up the hill that he was very close to getting his black belt in Karate. He was endlessly enthusiastic.

The thing was – and I want to say this correctly – of course there were obvious differences in his playing. Firstly – his tone was huge! He had great intonation. He understood form and function, as well as having an innate musical emotional knowledge. He had a big problem though. It was rhythm. It was kind of catastrophic. His problem had 3 parts. Mathematical, pulse, and the ability to play synced with others. It kind of made a mess of his groups, but he was so fun to be around, it didn’t end up really mattering that much.

The final student concert, in the historic opera house (kitty corner to the bait shop), was a memory that I believe is seared forever in the minds of the 200 people gathered together on that sweltering humid Saturday afternoon – sitting on those old squeaky red velvet chairs. Frank’s quartet was playing an Op. 18 Beethoven, and had been working hard for 3 weeks. As they sat down to play, I noticed a teeny hubbub right before they launched in. And launch they did. With gusto. The sounds coming from the quartet were both familiar and foreign – it became clear, quickly, that something was seriously amiss. One phrase would be wonderful, then things would careen off into a twisted rendition of reality. The faces of the non-Frank members of the quartet began to take on a frantic, fearful look, and Frank just beamed. I realized, all of a sudden, that he didn’t actually have his music. He was winging it. With enough Joie de vivre for all of us. And, once we all let go, it was a terrific ride. At the end, the rousing audience response, and the clearly still intact camaraderie of the quartet, left us all with a feeling of confused warmth.

I hugged the quartet as they came off stage, and Frank pumped his fist, saying “Nailed It!”. And, just in case we didn’t know by then, “I forgot my music and realized that I was just going to go for it!”. He went on to explain that he had been taking composition and improv lessons from a bass player this year, and was happy to have the chance to explore his new skill-set.

I guess, when I think back on that summer, I love what Frank was about. He was about a life filled with curiosity, optimism, a can-do attitude. He lifted all of those around him, and we all became better people for it. And, in the end, through the chaos of that concert, he never let his colleagues down.

It seemed to me that Frank had lived a life without instructions, without the music. There was structure around him, but he had spent his whole life navigating physical, emotional, and cultural landmines. He found his own particular rhythm to dance around and over these obstacles – he found his joy and desires despite, or perhaps because of, the inability to have a normal framework of life. Whereas the rest of us stare at our music, following the directions to life, Frank never had his music, he learned not to need it, through pain and separation and struggle. He found light, freedom and possibility in what was was missing. We are on this planet for only a short while, and of all of us, Frank knew this first-hand. I learned from him to try to live a life without music, not being afraid of the dark, but rather to delight in the shadows and surprises that havoc creates – to find the beauty in chaos. 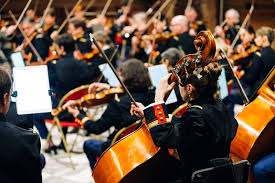