The 26th Verbiaer Festival has just bee rolled out with all the usual yodelling and sycophancy.

Gergiev is in charge of the festival orchestra.

There will be a concert performance of Strauss’s Die Frau Ohne Schatten with Matthias Goerne and Nina Stemme and a concluding show of Mahler’s second symphony in a perfectly inadequate acoustic. 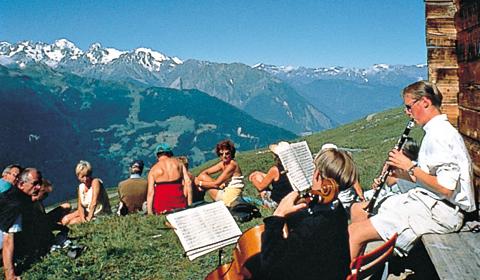 World premiere of Three Lullabies for viola and piano by Thomas Adès, commissioned by The Verbier Festival
Concert staging of Strauss’s opera Die Frau Ohne Schatten with Nina Stemme and Matthias Goerne
Leading soloists including Renaud Capuçon, Sheku Kanneh-Mason, Leonidas Kavakos, Evgeny Kissin, Vadim Repin, András Schiff, Daniil Trifonov and Arcadi Volodos
150 masterclasses with top musicians such as, Kristóf Baráti, Pamela Frank and Jian Wang
“You can think you know everything about Verbier, but once there you’re in for a surprise. That’s one of the Festival’s key elements” Vadim Repin

The Verbier Festival, now in its 26th year, presents 17 days of performances, masterclasses, talks, screenings and education events. The Festival runs from 28 July to 3 August in the picturesque setting of the Swiss Alps, with repertoire ranging from baroque to contemporary, including the world premiere of Three Lullabies for viola and piano by Thomas Adès, commissioned by the Festival.

The Festival’s mission is to encourage encounters between great musicians and young aspiring artists from around the world. Audiences witness these unique encounters and partnerships through the Festival’s programme of concerts and free events set in the unrivalled surroundings of Verbier. Having just celebrated its 25th anniversary, the Festival’s attendance is at an all-time high with a 16% increase in ticket sales.

The Festival’s Music Director Valery Gergiev opens the Festival with violinist Kristóf Bárati who will perform with the Verbier Festival Orchestra for the first time. Gergiev will also conduct one of this year’s most eagerly awaited performances of Strauss’s Die Frau Ohne Schatten with a prestigious cast including Brandon Jovanovich, Matthias Goerne and Nina Stemme.

Two quartets – Quatuor Arod and Quatuor Ébène – perform recitals, and a number of new partnerships are formed between visiting soloists such as Daniel Hope, Lawrence Power, Marc Bouchkov, Sheku Kanneh-Mason and George Li who will perform Elgar’s Quintet for Piano and String Quartet.

Other highlights include Leonidas Kavakos in concert with Evgeny Kissin and Karita Mattila, and Renaud Capuçon in concert with András Schiff. The Festival concludes with a performance of Mahler’s Symphony No. 2 featuring Golda Schultz and Ekaterina Gubanova alongside the Verbier Festival Orchestra and Oberwalliser Vokalensemble.