El Sistema’s Simon Bolivar Orchestra, controlled by the Maduro regime in Venezuela, will play today at the Vatican in a concert for “Religions and Sustainable Development (SDGs): listening to the cry of the earth and of the poor”.

‘Music and art are an extraordinary vehicle for the edification of the spirit and the integral development of the person,’ explains the organising Cardinal. 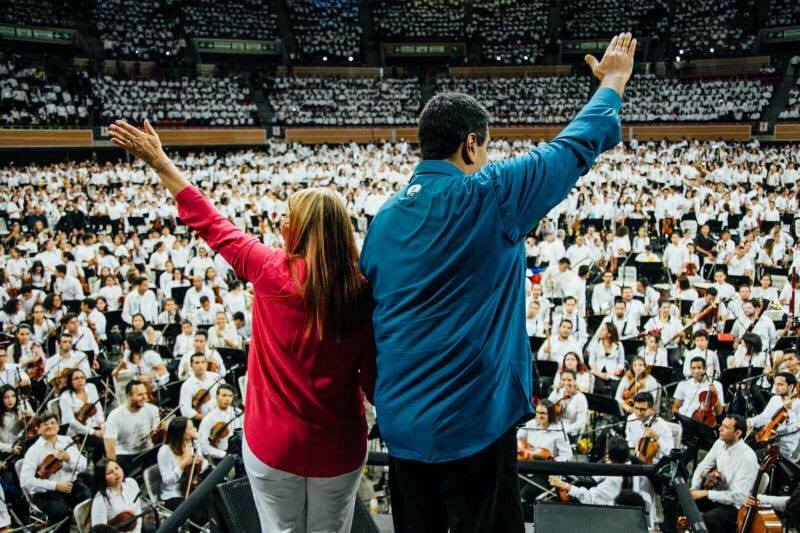 Dear Sir:
I read your note in which you mention the concert by the Simón Bolívar Orchestra, calling them “stooges controlled by the regime.”
There are some comments I would like to make based on your “appreciation” of such event; which I do as a Venezuelan, living under the current hell of the CH regime, but also with emotional ties to El Sistema, having a daughter in it for many years.
First, you well know that the Sistema was NOT founded by the current regime, having celebrated this month 44 years of its foundation by Maestro Abreu. Obviously 44 years of this Hell would mean Venezuela would have sunk further than what it is already in.
Second, the fact that the Chavistas (CH) designate some of their officials in the Board of DIrectors of El Sistema, does not mean they are involved, control, or make anyone there, less of all the musicians, as stooges or puppets of the current government. El Sistema is comprised by thousands of musicians, most of which come from impoverished households, that have grown as musicians and as persons thanks to the discipline and ethos of their musical and personal formation. Indeed, many of those who have fled the country due to our political and humanitarian crisis are playing in orchestras everywhere in the world.
Third, locally, when you attend rehearsals or concerts, politics are left out, and you seldom (really rarely) see any of these characters (I mean the appointed CH officials in the Board), present in any event.
Fourth, in the really rare instances they have tried to meddle in (supposedly in a recent case), the concert was suspended by its conductor; unwilling to become a flagship for any political manifestation. Indeed political discourses inside are rare, if any. This is an educational and social program, and politics should not have a place in it, from either side of the spectrum, even if some try to use it as such.
Regardless of these facts, in the past, playing in the Vatican by a Venezuelan orchestra would have been great news for all. Now, all is silence; first because it is not the time with all that is going on, both from a political viewpoint and in the milddle of this severe economic and humanitarian crisis. Second, because it is not “the” place to go, thanks to the wishy-washy position of the current Pope in our crisis, continuing to press for useless negotiations (and notwithstanding their own ethical battle inside the Church).  Nonetheless, I do have to say that the Venezuelan Church (not the Pope) has kept a very critical position against human rights violations, unfair imprisonment, lack of liberty and many other situations denounced by many, including trustworthy NGOs, about the conditions here.
Finally, I know some of these musicians in the SImón Bolívar orchestra, included the conductor; which are all professionals, hardworking individuals, who suffer the same difficulties Venezuelans have. Most of them are teachers of hundreds of children that are part of El Sistema..
None of them, including my own daughter, deserve your derogatory label.  El Sistema has to continue its work and legacy, with its up and downs, regardless of who is in power.
Sincerely,
Venezuelan and proud mother of a member of El Sistema