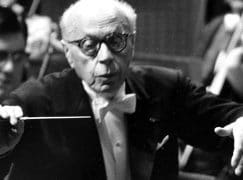 My close-up on the sheer hell of George Szell

Our third and final extract from the new book by ex-LSO leader John Georgiadis:

A great admiration for the many fine LP’s made by George Szell with his Cleveland orchestra, meant a high level of excitement when it was announced that he would make one of his rare trips outside the USA to be guest conductor with the LSO. Our first surprise was his small stature, although we shouldn’t have been, as so many of his most celebrated colleagues of the baton-wielding variety were also much smaller than publicity photos would have you believe. However, seeing this diminutive figure climb onto a quite high podium – now we understood why the platform was double its usual height – was far outweighed by the astonishment I experienced when, from my front seat position, I could see clearly his knees shaking inside his trousers. Could this be true? Was this great Maestro, with that famous reputation for ruling with an iron fist, really frightened of us? It would appear so!….

….After passing through a few of the introductory bars that the orchestra had played faultlessly, where he couldn’t easily find anything to correct, the first notes played by the harpist gave Szell just what he was looking for. He stopped the orchestra, looked in the direction of the gentleman wrapped around that angelic instrument, and said, “Sir, your instrument is not in tune, kindly adjust it”. No big deal, for even though this was not our regular harpist, he was a very competent and much respected player. There was a short period while the orchestra sat quietly, listening to the necessary twanging of strings and clanging of tuning key, and then a few seconds of silence which suggested he was ready to proceed.

Szell re-started, but once again stopped the orchestra at the same point. “Your instrument is still not in tune, kindly attend to it”, said the Maestro, only now a little more forceful. And so came the clanging and twanging once again, but this time definitely a bit longer and louder with a distinct element of defiance, as our colleague was starting to suspect a personal attack. We also, were beginning to wonder…….! After all, to pick on a harpist…… It’s like taking sweets from a child…..

….The third attempt to play the offending passage ensued but with a similar result. “I tell you once again, your instrument is not in tune and it is not possible to work with it in that condition.” After a moment’s silence came the quite aggressive response, “How would you like it Dr. Szell, sharper or flatter?” spoken with no small amount of belligerence. Our harpist colleague had no doubt decided that enough was enough and it was time to put a stop to this obvious victimisation.

What followed was an extremely brief monologue from the Maestro in which he intimated with great clarity that he didn’t want it sharper or flatter, or more to the point, he didn’t want it at all with that particular harpist…..

….So within the space of his first 10 minutes as a guest conductor, George Szell had fired the harpist. The result of this very unusual happening was that this little man on the box was suddenly not so small and his knees, or for that matter his baton, were definitely no longer shaking, whereas many of us sitting around him were feeling more than a little wobbliness around the mid-leg region!

« The major works on Shostakovich

A competition goes behind a screen »