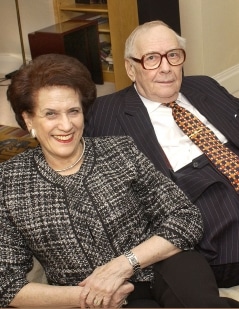 Death of a vital impresario

We are saddened to report the death of Victor Hochhauser, a central force in music for seven decades. Victor died yesterday in a London hospital, in the week of his 96th birthday.

Together with his wife Lilian, who survives him, Victor was the first to succeed in touring Soviet artists after the death death of Stalin. He introduced to the West the likes of Oistrakh, Rostropovich, Gilels, Richter, Rozhdestvensky and many more. Dmitri Shostakovich stayed at his house. Many of them remained close personal friends after the Soviets declared the Hochhausers personae non grata. The Bolshoi Ballet was for many years their hallmark import.

Victor and Lilian were married for 70 years. Their four children have achieved outstanding success in different fields.

A devout and observant Jew, Victor stood apart from the rat-race of the music business, following his own rhythms and high principles. He earned the respect and affection of musicians as disparate as Rudolf Nureyev and Pierre Boulez and he was an inexhaustible fount of good stories.

We are all blessed by his initiatives.

The major works on Shostakovich »