At our last gig, the reviewer was my Mom

Last week, the Artemis Quartet played it’s final European concert with members Eckart Runge (founding cellist) and violinist Anthea Kreston. In the Elbphilharmonie Hamburg, and with the remnants of my “Inside Music” tour along for the bonus concert, I was happy to have my mother there for this important occasion. A USA tour caps off the last of the Artemis concerts in this configuration, before tours with new and old members commence in Europe, first half of the concert in sextet formation before the new group takes the stage in Smetana’s “My Life”. As I sit in the passenger seat of our car, Jason is driving us to the Universität der Künste, Berlin, where we spend the week putting together the Beethoven Piano Trios for our upcoming cycle with Trio Libermé. The new Artemis is also rehearsing – and we will find each other, I am certain, in the student cafe, Joseph’s, where we will greet each other, then spin off into our own, new huddles, to drink cappuccino and eat huge, warm, puffy pretzels with large salt crystals hanging on to the split surface of the crusty dough.

These last tours with the Artemis have felt so large, so strong – like we are superheroes. Because all 4 of us are living two realities – present and future – simultaneously, it feels like we have to prove to ourselves, and to the audience, not only who we are at the present moment, but also what our potential is. So the commitment to the moment is exponentially intense (the pianissimos nearly inaudible, the ensemble work impeccable).

I noticed that my mother had a look, as she was waiting in the CD signing line, taking photos of me – she looked kindof stunned and foggy. Probably, I thought, she had an Artemis Experience like I had 24 years ago in Paul Hall at Juilliard, when I heard the Artemis play Schubert G Major. It seemed like the first time she looked at me like I was an adult, like I was a full-fledged success in my own right. And so, as she was waiting for her airplane back to Chicago, I asked her if she would like to write about the concert. What follows is just about the least impartial concert review a person could ask for. It’s the Mom Review.

I think I could fairly describe myself as a hard core classical music lover, since I first started picking out things by ear on my parents’ piano at a very young age. Now I attend probably 3-5 concerts (symphonic, chamber, choral, recitals et al) per week. But of all those concerts heard over many, many years, none has affected me more deeply than the one I heard last night, the Artemis Quartet concert in the “Kleiner Saal” (chamber hall) of Hamburg’s spectacular Elbephilharmonie. This was the quartet’s last European concert before two of its members, founding cellist Eckhart Runge and second violinist Anthea Kreston (my daughter) were to leave the ensemble. I travelled from Chicago because I knew it would be special, but last night was beyond anything I could have expected, affecting me so deeply that at the end I could not speak and had to fight back tears. Even now, on the plane returning home, those same emotions return as I write this.

As the mother of one of the musicians, I was afforded the rare privilege of attending the preconcert rehearsal. There I got a glimpse of the level of detail at which the Artemis works. Far from a mere run-through of the evening’s program, they worked on the tiniest details of interpretation, dynamics, and timing in specific passages. But even that did not prepare me for what was to come in that night’s concert. It was a deep and solemn program, but not without uplifting moments, as befitted the nature of the event. Opening with Barber’s Adagio, played with a sensitivity and profundity that I had never heard before in this oft-performed piece, it moved on through Britten’s Quartet No. 2, and after the intermission, Schubert’s Quartet in D Minor, the Death and the maiden quartet. The precision, the absolute agreement of the players, the depth of emotion, the electrifying climaxes, and the masterful contribution of each player all combined to reach me more deeply than I can recall at any other concert. But it was the first of the two encores, the profound 2nd movement of Shostakovich’s Quartet No. 7 that conveyed a feeling of total devastation to me that could never have been achieved with mere words. I learned later that it was written after the death of the composer’s wife, but that information was unnecessary to an understanding of the emotion expressed. Looking around me at my fellow audience members who sat completely motionless in rapt attention, I can only assume that many were experiencing the same emotions. The concert epitomized communication between performers and audience at the highest level. As the six curtain calls and two encores demonstrated, bravo Artemis. May you continue to bring music to the depths of your listeners’ souls, and pass on that passion to the next generation through your teaching and your example. 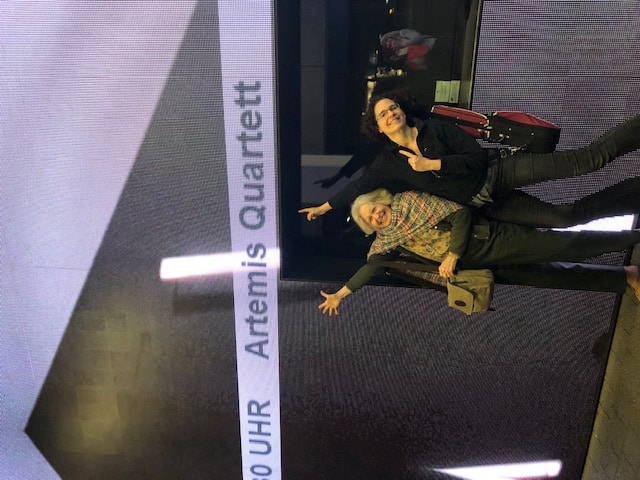