From a corespondent:
For the past 5-6 years Muziekegbouw Eindhoven has been struggling with a large financial deficit due to a disproportionate annual increase of the venue’s rent. The city council of Eindhoven, responsible for signing a 40-year contract some 25 years ago, has decided that Muziekgebouw should cover that lease every month while simultaneously cutting back on subsidies. Weirdly enough, the city council is the one and only shareholder of Muziekgebouw.
The council is now demanding that Muziekgebouw come up with a plan before April 1st to make ends meet. This means that the artisitic planning is under serious threat as well as a lot of jobs since various audits by several different third parties over the years have shown that the organistion is already as lean as it possibly can be.
Employees are organising a demonstration at the city council offices to day at 1600, including performances by sympathising artists, a dj and members of the Philharmonie Zuidnederland orchestra who have their home at Muziekgebouw Eindhoven.
There is a petition (also in English) that people can sign here. 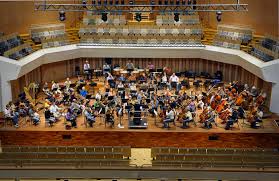