Was this your first LP?

The novelist Marina Lewycka in the Times today:

In 1960, much to my mother’s disgust, my father went out and bought a new Dansette record player. She was disgusted because, ever the thrifty one, she thought the money could be much better spent on household essentials, but I was delighted because I guessed I would have access to it, to play my own and my schoolfriends’ music. At the time we were living in Witney, a few miles up the road from Oxford, and I had a Saturday job in WH Smith, for which I earned 50p a day, so I was rich.

The next week my dad went to the HMV store in Oxford and started to build his classical record collection. Among the first vinyl LPs he brought home was one from Decca with a strange cover depicting bare, twisted, tormented-looking winter trees and a moody-looking Frenchman on the back, whom I mistook for Berlioz, but who was in fact the Dutch conductor Eduard van Beinum. I still have it…. 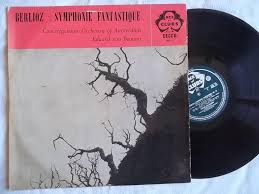 Marina is the author of A Short History of Tractors in Ukrainian and The Lubetkin Legacy.

So what was your first?