Krzysztof Polonek of the Berlin Piano Trio has won the vacant concertmaster’s seat at the Berlin Phil.

He is already a member of the orchestra. 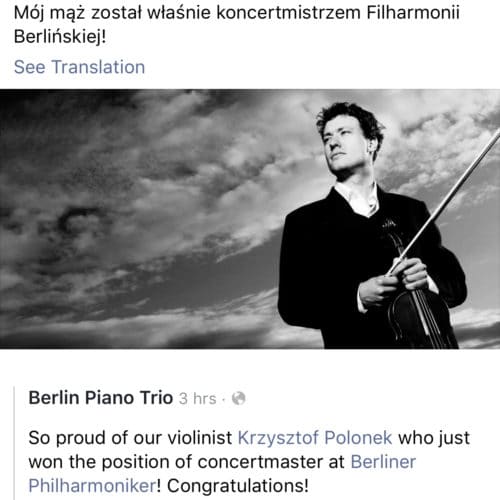 From his official Berlin Phil c.v.: Krzysztof Polonek studied first at Berlin’s Universität der Künste with Tomasz Tomaszewski, later with Thomas Brandis at the Lübeck Musikhochschule, where he completed his studies with a concert exam. Additionally he gave a graduate concert in the chamber music department of the Hanover Musikhochschule and received grants from the Seymour Obermer Foundation in Switzerland, the Ferenc Fricsay Society in Berlin and the Villa Musica of the German state of Rhineland-Palatinate. He began his orchestral career in 2001 as 2nd Konzertmeister of the Deutsche Oper in Berlin. Engagements followed in leading positions at the Dresden Philharmonic and Berlin’s Rundfunk-Sinfonieorchester before he became a member of the Berliner Philharmoniker.

UPDATE: This just in from the Berlin Phil –

We congratulate Krzysztof Polonek who won the audition for the position of concertmaster on 14 February. He succeeds Andreas Buschatz, who left the Berliner Philharmoniker in 2017. The Krakow-born violinist, who has been a member of the first violin section since 2009, comes from a family of musicians. His father, the violist Zdzisław Polonek, was also a member of the Berliner Philharmoniker. Krzysztof Polonek, who studied under Tomasz Tomaszewski at Berlin University of the Arts, under Thomas Brandis at the University of Music Lübeck and under Markus Becker at the University of Music, Drama und Media Hanover, began his orchestral career in 2001 as second concertmaster with Deutsche Oper Berlin.