It has been an open secret in what’s left of the record business that Decca and Deutsche Grammophon were mud-wrestling over which got first to the bar to sign the Birmingham conductor, Mirga Gražinytė-Tyla.

Mirga, 32, will be the first woman conductor on the DG list. 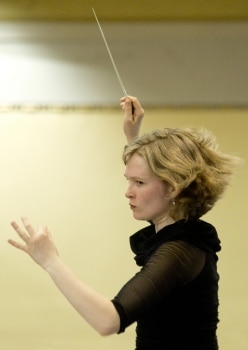 Her first release will be music by the Polish-born Soviet composer Mieczysław Weinberg – his Symphony No. 21 “Kaddish” with the City of Birmingham Symphony Orchestra, plus the early second symphony. She will go on to record music by her compatriot Raminta Šerkšnytė with the Lithuanian National Symphony Orchestra, Vilnius Municipal Choir and Kremerata Baltica, followed by works by British composers with the CBSO.

Mirga said: Deutsche Grammophon was part of my musical upbringing. It’s a genuine honour to join DG and to record works that will be new to so many listeners. The music of Mieczysław Weinberg and Raminta Šerkšnytė, a rising star among Lithuanian composers, deserves to reach the widest possible audience. It’s very exciting that our partnership will document some of the musical adventures that the fabulous CBSO and I are about to embark on together and will celebrate the orchestra’s centenary with an album of landmarks of 20th-century British music. I look forward to this thrilling collaboration with DG and to the musical discoveries we can make together.’