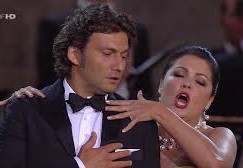 The Times reports today that scalpers on Viagogo are charging vast amounts to see and hear Netrebko and Kaufmann in Forza del Destino, the first time they have appeared together in a decade, apparently.

The paper feigns outrage over the tickets being subsidised by the taxpayer, which is true.

But there’s a market at work out there. If someone was lucky enough to score seats for the rare event and can’t use them, what should they do – give them away?

And if someone else is prepared to pay a king’s ransom to see Anna and Jonas entwined before they die, what’s to stop them?

As they once were.