The only Finn on Hollywood’s Walk of Fame

There was an orchestra-backed performance last night in Helsinki of Mauritz Stiller’s 1919 film, The Song of the Scarlet Flower, with the original score by Armas Järnefelt – believed to be the first film soundtrack by a Nordic composer.

A recording will be released later this week by Ondine.

Stiller, a prolific director, discovered Greta Garbo and took her to Hollywood, earning his footprint of fame.

No Finn has ever made it there again. 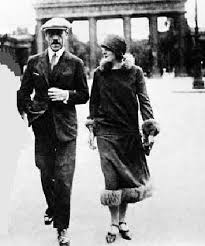