Dudamel is named on Hollywood Walk of Fame 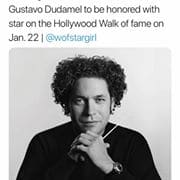