Why musicians are rallying against Brexit

‘Musicians need Freedom of Movement to survive. Touring bands like Led Zeppelin and Queen began with European tours. No promoter will carry the burden of the extra cost of a work visa, and neither can the artist. It’s the same for classical musicians, composers, actors, dancers and all freelancers.’

The words of Dame Sarah Connolly CBE, who will be rallying with a display of solidarity from musicians across the spectrum on Monday, from noon at Parliament Square in London. The government’s own Department for Digital, Culture, Media and Sport estimates “a major increase in the value of the UK’s creative industries from £94.8 billion in 2016 to £101.5 billion in 2017. Jeremy Wright MP says: ‘Our creative industries not only fly the flag for British creativity but they are also at the heart of our economy.’ As British composer Howard Goodall puts it “100s of 1000s of people’s work depends on their being able to work some or all of the time in the EU. That’s what their businesses do & have done for decades. Without the ability to take your van of goods/skills/whatever & work in the EU they have no job, no livelihood. Some of those people are musicians. By & large they are not rich or famous or an ‘elite’ but ordinary folk with a sellable skill. Right across the creative & services sector of our economy the same inescapable reality is true.”

Many UK bands, orchestras and choirs leave to tour the EU on and after March 29th 2019. At this point they still don’t know if they will have to apply for visas (a costly exercise for small organisations) or if the current rules will still be in force. The current Withdrawal Agreement suggests that Freedom of Movement will be lost for subsequent generations, which will inevitably deplete the contribution that this sector makes to our economy year on year. The last word goes to Dame Sarah:

‘Imagine Womad or Glasto with no new acts, or the entire classical music industry bankrupted by visa costs as our young musicians have no chance of working abroad. Let’s keep the doors open for them and remain leaders in our field.’ 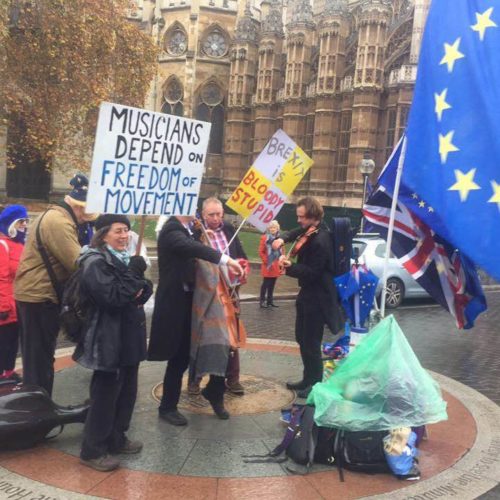