So you think Dvorak’s ‘Going Home’ is an Afro-American tune?

The Boston Camerata founder Joel Cohen is about to put us right:

It’s that holiday time of year, and to celebrate Thanksgiving, National Public Radio recently ran a feature segment about a bit of iconic Americana, namely the famous „Going Home“ theme from Antonin Dvorak’s „New World“ Symphony, which the famous Czech composer wrote during his American stay, circa 1892-93. It’s a magnificent and instantly memorable tune, stated at the beginning of the Symphony’s second, Largo, movement by a deeply expressive English horn against a background of sustained string harmonies.

When this writer was in grade school, in Providence, Rhode Island, circa 1949, he was told by his music teacher that the melody was inspired by, or actually was, a „Negro“ spiritual, and was representative of the profound soulfulness of the slaves and their descendants.

The NPR piece I caught on the radio a few days ago recycled, more or less, the fable I was told as a
child, and which seems to have surrounded the Dvorak Largo since, pretty much, its inception. The
Largo melody, said NPR, was „inspired by black spirituals.“

A mis-statement, but in all fairness, that was kind of what foxy old Dvorak had himself suggested about the themes in his symphony. Nonetheless, the truth will out. My dear fellow Americans (and other citizens of our strange, fascinating world), that tune, wonderful as it may be, and even though in grade school I was encouraged to sing it with the unspeakable „Massa dear, Massa dear“ lyrics, was not the least bit African-American. That fact, though barely acknowledged, has now been abroad in the land for a certain number of years, ever since soprano/scholar Anne Azéma identified the white gospel model,
and the Boston Camerata recorded it for a French record label in the late 1990s (re-issued circa 2008 by Warner Classics). And yet, somehow, the old, Massa meme continues to circulate.

Here’s the real story: Dvorak’s inspiration was a rollicking gospel hymn with a Christmas text, „Jesus the Light of the World,“ bearing at its foot the legend „Copyright 1890 by Geo. D. Elderkin. “ He borrowed/rewrote measures one to eight of Elderkin&#39;s song for the Largo theme. The copyright date for the model, we need not stress, reads only a couple of seasons before the great composer got to work on his New World masterpiece. To prime his creative pump for the Largo, the Czech master did not need to go to a plantation to hear the workers’ prayers, as was once suggested to me in third grade; he simply needed walk out of his lower Manhattan dwelling, head to a music store, and pick up a printed anthology of gospel songs. Which, we must now assume, he did.

Contrary to the „Negro“ myth, therefore, it was white on white for the Dvorak Largo and its model/inspiration. The story is not over, however. There is still an important, African-American piece to this tale.

Both the original Elderkin song, with the Christmas text „Hark the Herald Angels Sing“ and the Dvorak adaptation/rewrite from the Largo movement, were later taken up and adopted by African-American
congregations. The Dvorak version became an actual spiritual/sacred song, „Going Home.“ And the original „Hark the Herald Angels/Jesus the Light of the World“ continued in use, and, unremarked by NPR commentators and so many others, continues to be sung to this day. What is odd to me is the separateness of these two streams. On the one hand, you have an „official,“ erstwhile „Negro“ theme, composed in reality by an eminent, Central European symphonic master, serving, despite its non-American paternity, as a kind of symbolic icon of Americana.

It’s not black music but has been presented, for several generations now, as a somehow-respectable representation or avatar of black music.

On the other hand, you have this very energetic, authentic, American gospel song, Christmas-themed, continuing in the African-American church tradition. And no-one in over a century, or almost no-one, seems to have picked up on, or celebrated, their kinship: the pseudo-black song, and the white-loved- by- black-people original. But they are kinfolk, and they are both, like so much that is American, of mixed heritage. And perhaps celebrating their shared genetic code is one small step towards breaking down some racial and cultural barriers. Happy holidays! Or, perhaps, veselé Vánoce. 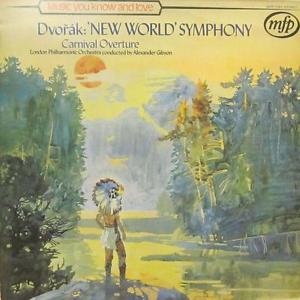