She has never sung at English National Opera.

John Berry’s new company has signed Renée for Adam Guettel’s musical The Light in the Piazza.

This is one big coup for the Berrywaggon. 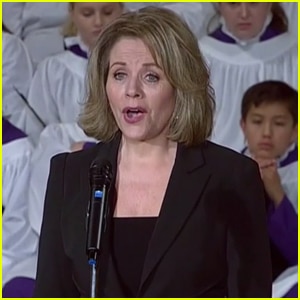 Scenario Two are proud to announce that their debut production will be the London Premiere of the dazzling musical The Light in the Piazza. With a book by Craig Lucas and music and lyrics by Adam Guettel, The Light in the Piazza is a touching and heartwrenching love story set in Florence during the summer of 1953.

It will be performed on the stage of the Royal Festival Hall for twenty performances only in the summer of 2019, with a 40-piece symphony orchestra and an all-star cast. This new production will be directed by multiple Olivier Award-winner Daniel Evans and performed by opera superstar Renée Fleming and film and television star Dove Cameron – both making their London stage debuts with the Orchestra of Opera North performing on-stage conducted by Kimberley Grigsby.

Four-time Grammy winner and Tony nominee Renée Fleming makes her long awaited London music theatre debut as American Margaret Johnson. Dove Cameron makes her UK debut as Margaret’s troubled daughter Clara; she is best known for her role in Disney’s The Descendants trilogy, recently starred as Amber von Tussle in NBC’s Hairspray Live! and is currently starring as Cher in the Off Broadway production of Clueless: The Musical.