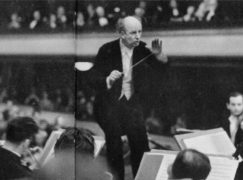 Why Furtwängler fans are so touchy

Over nearly 40 years of writing about music I have learned that one subject will bring readers clamouring for my head.

Wilhelm Furtwängler is the touchiest subject in classical music.

Not because there is any doubt about his status – he was one of the most interesting and important conductors of all time – but because of his role in Nazi Germany, a role over which he played dumb, or maybe genuinely failed to understand.

Furtwängler, as has been shown time and again, was in denial about Hitler and the Nazis.

He claimed to serve the German nation while he was actually boosting the prestige of the Nazi regime.

His moral stance was, at best, ambivalent. His fans, however, can see only whiter than white.

That perceptual difference will never be resolved, but it will not stop me commenting when new evidence arrives of the conductor’s uniquely compromised situation.

« Yuja Wang is barred by Stravinskys from playing Sacre

Watch: All the sex in Alban Berg’s Lyric Suite »