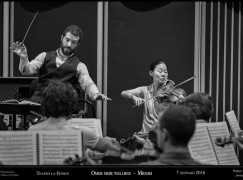 The BBC’s most inspired conductor pick in years

Confident, cultured and charming, Omer Meir Wellber is arguably the most inspired musical appointment the BBC has made for years. I’m surprised such a characterful conductor got through the vetting process.

Tomorrow the 36-year-old Israeli will be announced as the new chief conductor of the Manchester-based BBC Philharmonic, despite having conducted the orchestra for the first time only in March this year (he’s back doing Mozart and Wagner this month). Was it love at first sight?

“We had a small flirt and it went well,” he says….