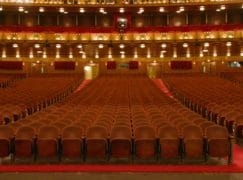 Having lost the first crucial wave of public opinion, the Lyric has put out a justification 24 hours later for its hardline position vis-a-vis the orchestra musicians.

One line stands out on first readng: ‘Lyric is very proud of its 80% occupancy’. That’s nothing to be proud of.

· Under the new contract proposal, Lyric is offering average annual take home wages of $82,500 per orchestra member for 22 weeks of work and 20 hours of work per week. Any work over 20 hours per week is paid as overtime.

· Lyric will continue to offer full health benefits to all orchestra members and their families year-round. In 2018, Lyric paid 92% of the total cost or $954,000 while orchestra members paid 8% or $86,000, as their total combined contribution. The current proposal maintains this benefit.

· Lyric will continue to pay into an expensive defined benefit pension plan for the orchestra. The contribution has increased and next year will be 11.99% of wages.

· As an example of the inefficiencies embedded in the current agreement, during the 2016/17 season, Lyric paid $1.8 million in wages (not including the cost of benefits) to orchestra members for work weeks that Lyric could not use. These payments were guaranteed by the contract. Lyric’s proposals only seek to reduce a fraction of these payments.

· The new contract proposal provides for additional work when The Joffrey Ballet moves to the opera house in 2020 and continues the offer of additional work on the annual musical. During the 2019/20 season, the planned Ring Cycles represent an additional five weeks of work for 95 orchestra musicians at a cost of more than $1.5 million to Lyric.

· IATSE (ratified) and AGMA (subject to ratification) have agreed to contracts with similar provisions.

FACT: We are offering wage increases for musicians – but only for the time they are working.

Put simply, Lyric’s current contract requires Lyric to pay musicians for 24 weeks of work when its season is only 22 weeks. This weekly pay guarantee dates back more than 10 years, when Lyric had 86 performances in its season. In Lyric’s current season, only 56 performances are scheduled because that’s the maximum number supported by audience demand. Lyric needs to align musicians’ weekly guarantees with the length of the season.

FACT: Lyric’s proposal does not reduce the size of the orchestra used for any Lyric performance. It reduces the number of people who are guaranteed payment whether or not they play.

Lyric is committed to supporting a world-class orchestra with the full sound and artistic expertise required for each opera performed.

Lyric currently employs 74 regular orchestra members, all of whom are paid for the currently guaranteed 24 weeks, whether the score of the opera being performed calls for 74 players or not. Lyric is proposing the number of guaranteed players be reduced to 69 – through attrition only.

The number of musicians taking part in each performance is determined by the needs of the opera. For some operas, that will be significantly more than 69, and Lyric will pay additional members accordingly. For other operas, it will be less, but Lyric would still pay 69 under the terms of its proposal.

FACT: The current contract requires Lyric to pay musicians for eight radio broadcasts that no longer take place – this is not sustainable.

In addition to their regular pay, musicians are paid a fee for live radio broadcasts when they occur. Lyric just can’t afford to pay them when it is not actually broadcasting. Although Lyric would love to continue its opening night broadcasts, it has been unable to raise sponsorships to support them. Lyric continues to explore new ways to increase access to its artform.

FACT: Lyric’s budget has grown because it has added activities like the annual musicals and community engagement initiatives that pay for themselves and provide revenue to help underwrite Lyric’s grand opera season.

Lyric’s budget was $60M in 2012 when Lyric only did eight operas on the main stage. When Lyric added activities like the musical and community engagement initiatives, its operating budget grew to ~$78M. The $84.5 million 2017 budget quoted in some union materials was an anomaly because of three large-scale new productions that season.

Diversifying its activities is helping Lyric create new revenue streams and, over time, expand its audience base. The new activities more than pay for themselves and, in fact, offset deficits from the opera budget.

FACT: Ticket revenue appears flat over the past 6 years, but the composition of that revenue has changed dramatically.

Total revenue today is comprised of revenue from many activities beyond grand opera.

Ticket revenue from opera ticket sales has actually declined to less than $20 million from more than $25 million in 2012. The 2018 total revenue budget from ticket sales was $25.5 million, which included $6 million in sales from the musical.

Additionally, most of Lyric’s new tickets sales come from single-ticket sales or small bundles of performances – both of which have a significantly higher cost of sale relative to the full-season subscriptions that at one time filled the Opera House.

FACT: We have maintained our occupancy rate because we have reduced the number of grand opera performances to align with patron demand.

Lyric is very proud of its ~80 percent occupancy rate, which is still among the highest in the industry. However, it’s important to remember Lyric’s occupancy rate is a result of a decreased number of performances.

FACT: Lyric has continued to renew the vast majority of our subscribers, even as we needed to transition them to series that include performances on different days of the week.

The decline in Lyric’s total number of subscribers predated the reduction in performances numbers and is a trend opera companies nationwide are experiencing.

FACT: Lyric has created and implemented a comprehensive marketing plan that is in line with today’s marketing best practices.

FACT: Lyric is good at raising money and Lyric supporters are among the most generous and loyal anywhere. At the same time, Lyric exists as a public trust, and our donors expect accountability around all aspects of our business, including our agreements with our unions.

Lyric has not lost the ability to raise money. Lyric simply needs to give its donors a compelling reason to invest in this company for the long term. Its donors expect – and deserve – real change.

Donors give to Lyric out of love for the art form, and they give because they know a great city deserves a great opera company and a strong Lyric Opera is good for Chicago. Fully 50 percent of Lyric’s operating budget comes from contributed revenue. The fact that IATSE and AGMA have reached agreements with Lyric management to help address its problems will motivate donors.

However, simply launching another special campaign like Breaking New Ground to provide funds to be drawn on when needed for operating costs is not a sustainable strategy. Donors want to invest in something they know will support Lyric far into the future. While they appreciate the cost-savings initiatives Lyric has already achieved and the new sources of revenue created, achieving fair and efficient union agreements is an important indicator of success for donors. This was borne out by the recent extensive study conducted by Grenzebach Glier + Associates, a highly respected fundraising consultant.

UPDATE: Within minutes, the Lyric issued a correction to its statement (incorporated above). Chaos reigns.