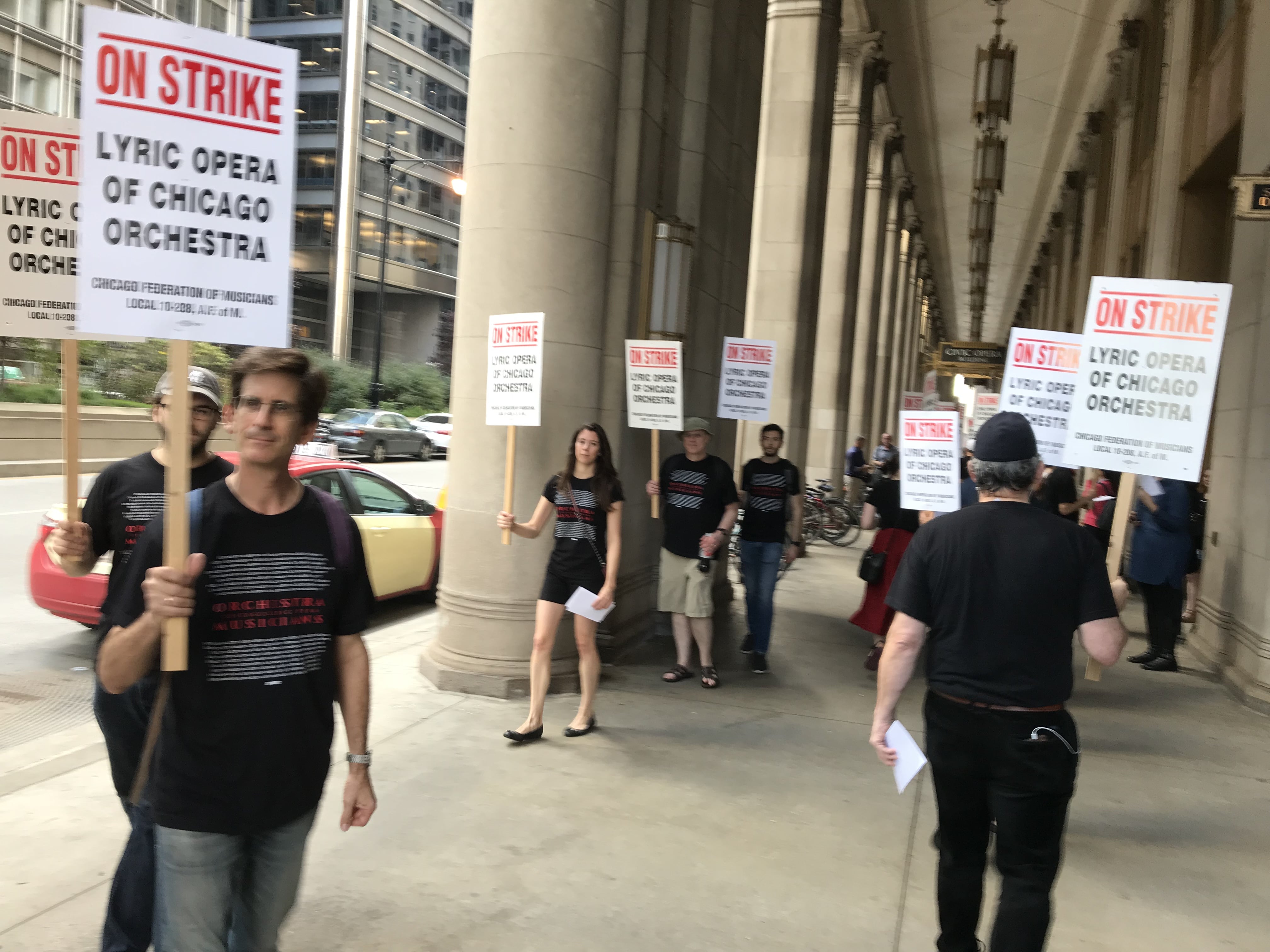 The striking musicians have disputed Anthony Freud’s claim that they were in for a big pay rise.

Here’s their response to the company’s bromides:

Regarding Wages: Anthony Freud’s calculation of $82,500 per orchestra member for Lyric’s settlement offer has been inflated far above the base scale for any musician. Lyric has proposed a three-year agreement (22 weeks each season) with increases of 3%, 1%, and 1%. The base scale for each of these seasons including an electronic media guarantee of $1,000 is $71,295, $71,998, and $72,708. These amounts are nowhere near the $82,500 quoted by Freud. To attach the phrase “per orchestra member” to that over-inflated dollar amount is simply false.

It is even worse for Freud to label his over-inflated amount “take home wages,” which, of course, would reflect wages after taxes, insurance, and other deductions. Taking into account such deductions, actual take-home wages would be far, far less under Freud’s proposal.

Last season, including media payments of radio and electronic media guarantee our base salary was $65,912; including vacation pay, it was $77,268. We have not received a raise in years. Since 2011, our weekly salary has increased an average of less than 1% per year in actual dollars; adjusted for inflation, our wages have actually decreased by 5.1%.

Freud’s proposed pay cuts would devastate Lyric’s ability to attract and retain the very best musicians, which is vital to maintain the international reputation of Lyric Opera of Chicago.

Regarding “20 hours of work per week”: Freud is misleading you. Orchestra Members work far more hours than they spend at the Opera House. To perform their jobs at the world-class level to which Lyric aspires, the musicians must spend long hours honing their skills and mastering every note of every opera. All that time is unpaid—and is absolutely required by the job.

Regarding Health Care: Musicians are uniquely in need of excellent health care due to the physically demanding challenges of the job and high risk of injuries. If Anthony Freud breaks his arm, he is at work the next day in a cast, getting his $800,000. If a musician breaks an arm, they are out for half the season and their very career may be in jeopardy. Quality health care is absolutely essential for musicians. We agreed to big health care cuts in the past. We agreed to pay more for health care in each of the last two Collective Bargaining Agreements. In 2015, we proposed (and Lyric agreed) an innovative “health insurance exchange” setup that has saved Lyric hundreds of thousands of dollars.

Regarding “inefficiencies embedded in the current agreement”: We have no idea what Freud means with this corporate-jargon babble.

Regarding additional work when the Joffrey Ballet moves to the opera house in 2020: Work on Joffrey Ballet is not guaranteed for all members of the Lyric Orchestra, and Lyric insists on provisions that would allow Joffrey to hire outside musicians and bypass Lyric musicians entirely. Furthermore, for these ballet performances we would be compensated at a fraction of our normal wage.

Regarding reduction of performances from 86 to 56: What kind of company would allow its management to explode the budget by $24 million (40%) while reducing its core mission – grand opera performances – by more than 35%? It makes no sense to spend more money, make less of your product available, diminish the quality, and somehow expect better results. That’s a horrible business plan.

Regarding offering wage increases for musicians: This is totally false. An increase in weekly wages means nothing if the number of performance weeks gets cut. Lyric is demanding an immediate 8% cut.

Regarding Ticket Sales: Lyric is ignoring the success of the Spring musicals. When accounting for the musicals, overall ticket sales have actually increased since 2012 ($25.03 million) to 2017 ($26.96 million). From the CFO’s own accounting, Lyric sold out 84% of their seating capacity. All three other major opera companies (San Francisco, MET, and National) settled this year each with a progressive, multi-year agreement. Lyric’s ticket sales problems are fixable; but the solution is not simply to cut the musicians’ compensation and benefits. That management decision is unimaginative, tired, and unfair.

Regarding Lyric reducing the number of grand opera performances: At what point will they begin expanding this number if 84% of each performance is sold? They are among the best numbers in the industry so an annual reduction of performances defies reason. According to Deputy General Director Drew Landmesser, “We’re hitting our numbers.” If that were in fact the case, it would be in the company’s best interest to expand the product to reach more audiences. With the continual reduction, it appears that Lyric is projecting failure. What kind of management does this?

And again, the question must be raised: what kind of company would allow its management to explode the budget by $24 million (40%) while reducing its core mission – grand opera performances – by more than 35%? It makes no sense to spend more money, make less of your product available, diminish the quality, and somehow expect better results.

Regarding Lyric’s Fundraising: We agree that Lyric’s supporters are among the most generous and loyal anywhere. However, earned revenue is never enough to cover expenses (hence the term ‘non-profit’), which is why Lyric must raise money. Lyric is very good at it. Before ‘Breaking New Ground’ there was the ‘Campaign for Excellence’, both of which were explicitly designed to cover operating expenses and both of which raised tens of millions of dollars.

The lack of energy in mounting a new special campaign has been attributed by Lyric to ‘donor fatigue’; but we have seen no evidence of that in Chicago. There has been substantial fundraising growth from other large non-profits in town such as The Art Institute, Joffrey Ballet, and the Museum of Contemporary Art. Perhaps the real issue is ‘Freud fatigue.’

For arts fundraising in general, look no further than the Giving USA annual reports, which show significant and steady increases in giving to the arts:

· 2015 report: “Rising 9.2 percent in 2014, estimated giving to arts, culture, and humanities saw the highest increase in giving among all subsectors.”

Regarding IATSE and AGMA settling contracts: We can’t speak for them and certainly weren’t present in their negotiations. What matters is what we, the orchestra, are fighting for.

« The most powerful women in US music

Airport rage: A cello gets beaten up in Manchester »