Monteverdi Choir and Orchestras announce the appointment of Dinis Sousa as Assistant Conductor. Sousa’s appointment represents a significant landmark for the ensembles, which have been solely directed by John Eliot Gardiner since he founded the now world-renowned Monteverdi Choir 54 years ago. This new role was created to give a young conductor the opportunity to work alongside John Eliot Gardiner and his three ensembles, and to be involved in the process of musicological research, preparation, and rehearsing associated with all MCO projects and tours. 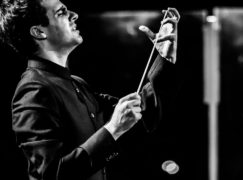 Not much more to say. Sousa, who is Portuguese studied at the Guildhall School of Music and Drama with Sian Edwards and Timothy Redmond. He is founder and artistic director of Orquestra XXI, an orchestra of Portuguese musicians living abroad.