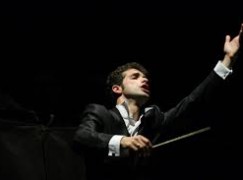 The BBC Philharmonic has named Omer Meir Wellber as its next chief conductor, starting September 2019.

Wellber, 36, will makes his BBC Proms debut with the orchestra next summer. He succeeds Juanjo Mena, who has led the orchestra for seven years. Wellber said: ‘I first worked with the BBC Philharmonic in March and knew straight away that they were a very special group of people and exceptional musicians. Manchester and the whole region is an incredibly rich area culturally, so I can hardly wait to start planning seasons to come.’

He is presently Principal Guest Conductor at Semperoper Dresden and Music Director of the Raanana Symphonette. In January 2020 he will become music director of the Teatro Massimo di Palermo.

UPDATE: Most inspired for years?