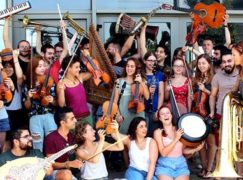 The Caravan Orchestra, a hybrid of Haifa University’s music department and Yiddish Summer Weimar has won the Shimon Peres Prize of the German Foreign Ministry for ‘outstanding contribution to the shaping of German-Israeli relations’.

Abigail Wood, head of the music dept writes: ‘The Caravan Orchestra, a collaboration between our Music Department and Yiddish Summer Weimar – and one of the most exciting, creative and exuberant music projects I’ve ever been involved in, mashing up Arab music, klezmer and pretty much anything in between – has won the prestigious Shimon Peres Prize of the German Foreign Ministry and the DIZF for ‘outstanding contribution to the shaping of German-Israeli relations’. Kudos especially to Andreas Schmitges without whose hard work, vision and supreme organisational skills none of this would actually happen, to Ilya Shneyveys and Jeries Murkus Ballan for making the music fly, to all the brilliant young musicians who have taken part in Caravan during the last two years, and to all those in Haifa and Weimar who have supported and enabled the project to happen. I’m amazed that such a fantastic project grew out of a (seemingly) one-off seminar with Alan Bern and Andreas in Haifa back in 2016… Proud to represent my Department and the Caravan team at the ceremony in Berlin next week along with Andreas, Alan, Ilya, Jeries and a few musicians.